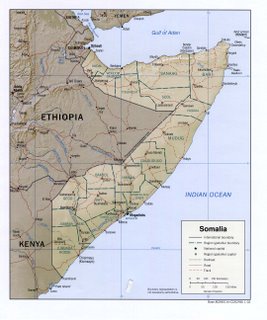 Apparently in some areas:

Islamic militiamen struggled to keep up with a flow of former rivals ready to surrender prized weapons Thursday, further cementing the radical Muslims' position as the undisputed power in the Somali capital.

The Islamic group seized large parts of southern Somalia from rival warlords in June, and has since used force, its status as arbiter of Islamic law, and negotiations to consolidate power.

The arms handovers came days after the militia attacked one of the last holdout warlords in Mogadishu, killing at least 70 people in clashes that ended Tuesday, when the rivals surrendered. On Wednesday, some 300 Islamic militiamen peacefully took Mogadishu's disused, rusting seaport from another secular warlord who was resisting the group's strict religious rule.

The rise of the Islamic militia has raised concerns about the establishment of Taliban-style, hard-line rule in the Horn of Africa country. The Islamic militia has grown increasingly radical since seizing Mogadishu, replacing a moderate leader with a radical cleric the U.S. has linked to al-Qaida.

Some 200 fighters loyal to warlord Bashir Rageh, a member of the group defeated last month, on Wednesday surrendered their weapons - including 15 trucks mounted with heavy weapons - to the group known as the Islamic Courts Council.

"We have been working with the warlords for a long time, so now it is time to give the chance" to the Islamic group, Yusuf Iyow, one of the militia commanders, told The Associated Press on Thursday. "We are committed to forget the past hostilities and to work with them."

"The only power in Mogadishu is the Islamic Courts Union, so there is no other option open for us but to surrender. Defiance only kills people and does not create opportunities" for peace, Iyow said.

The move disrupted plans to collect weapons from combatants loyal to another once powerful warlord, Muse Sudi Yalahow, whose fighters are expected to hand over arms on Friday. Their cooperation follows two weeks of negotiations mediated by elders from the Abgal clan, to which both Yalahow and Rageh belong, said their commander, Ali Daladle.

Clan elders also were negotiating a peaceful handover of Villa Somalia - the presidential palace and a stronghold of Interior Minister Hussein Farah Aideed, who is also one of several deputy prime ministers.

"From now on, people should feel secure now that Islamic courts have almost all the weapons in the capital," said Uqtar Abu Mansour, one of the leaders of the Islamic group. "We shall do the same in other parts of the country where arms other than the Islamic courts' exist."

Former U.S. ambassador to Ethiopia and State Department coordinator for Somalia David Shinn says the United States' policy of working with international and regional partners to bring peace to Somalia is the right way to proceed.
***
"A unilateral U.S. policy in Somalia is almost guaranteed to fail or achieve little. The only long-term strategy that has any hope for success must be coordinated carefully with key countries in the region, European allies, the African Union, Intergovernmental Authority for Development, United Nations, and the Arab League," the Horn of Africa expert told lawmakers.

Assistant Secretary of State for African Affairs Jendayi Frazer told the same Senate hearing, "President Bush and Secretary [Condoleezza] Rice have made it a priority to confront the ongoing turmoil in Somalia with a multilateral coordinated strategy."
***
Frazer told the Senate panel a group consensus has formed to view the Transitional Federal Institutions (TFI) as "the legitimate governing body in Somalia." She added, "We will work to strengthen its capacity and continue to urge dialogue" between the TFI and Court of Islamic Council (CIC). The CIC was formerly known as the Islamic Courts Union (ICU).
***
Militias backed by the Islamist-based movement CIC recently defeated warlords that had dominated Somalia's former capital of Mogadishu. On the question of the CIC's radicalism, Shinn told the lawmakers, "as sections of Somalia, especially greater Mogadishu, have become increasingly subject to the influence of extremist elements, the prospect increases for linkages to terrorism."

"This does not mean, however, that Somalia is likely to become a major al-Qaida base or that it is headed towards a Taliban form of government," Shinn said. "The vast majority of Somalis follow a moderate form of Islam and they are highly suspicious of foreign influence."

"Although there are some worrying developments coming from some of the Islamic courts, the situation is much too fluid to jump to conclusions," the former diplomat added.

Shinn said the CIC's structure is highly decentralized. "Some of the courts are led by extremists, others by moderates. They all agree on their goal to create an Islamic state. It is not clear, however, that they have the same vision for that state."

Perhaps most important, he said, is that the courts have developed so far largely on a clan and sub-clan basis. "Their power resides in the Hawiye clan, one of Somalia's five major clans. Their support among the Hawiye seems to be broad, but not especially deep. At least one Hawiye warlord in Mogadishu continues to hold out against the court militias. It remains to be seen if their authority will extend significantly to other clans."