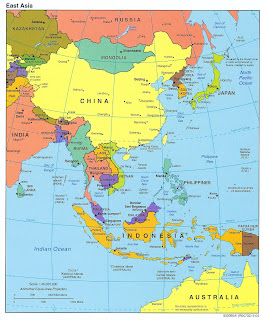 Interesting piece by Walter Lohman of The Heritage FoundationU.S. Policy in Asia: Managing Alliances in an Upside-Down World (picked up by Taipei Times here):


Fortunately, our alliances in Asia do have a real geostrategic objective: Managing the rise of China. All of the other things we do with our allies, while important in their own right, are ultimately secondary.
***
The policy crowd in Washington has largely coalesced around some version of a China-hedging strategy: trying to bring China into the existing international order as a “responsible stakeholder” while preparing for an alternative, more adversarial outcome. In government circles, however, this clarity is obscured by the real-life complexities of the U.S.–China relationship: economic dialogue and diplomacy around hot-button political/security issues like the Iranian and North Korean nuclear programs.

The Obama Administration, like the Bush Administration before it, has reconciled the complexities through indirection. The North Korean threat is a problem on its own, but it also stands in for the China threat. Administrations talk about the security of sea lines of communication, but the real problem is not pirates in the Straits of Malacca, but Chinese territorial claims in the South China Sea. Weapons sales to Taiwan are about an imbalance in arms strongly in favor of the Chinese. The trilateral dialogue among the U.S., Japan, and Australia was about China. The U.S.–India relationship is in large part about China. Engagement with the Association of Southeast Asian Nations (ASEAN) is about China.

By denying the hedges, we keep open the full range of options for working with the Chinese. Regrettably, we also obscure the real rationale for our alliance network and create uncertainty over our long-term staying power. (emphasis added)

And the ponder our communications to our allies and our own history.

Is The U.S. going through another one of those "isolationist" periods as far as refusing to accept a responsible role in international security - like that following World War I? See here.

Are we trying to force our allies to do more for themselves?

What is the third order cost of a U.S. weakening in the western Pacific and Southeast Asia?

Is the "pacifist" streak in the Democratic Party- that old isolationist crowd that has never really gone away- setting us up for a disaster in the Far East?
Posted by Mark Tempest at 5/17/2010 12:36:00 AM