On the cause of the BP offshore well blowout, some good speculation and explanation of what might have happened at BP’s Deepwater Disaster: What Happened And Why?:


Instead, it appears that a gas bubble got into the well bore, causing what's called a "kick" as it traveled up the riser. Even a relatively small amount of gas a can cause big problems because a gas bubble will expand massively as it moves from high pressure at the seafloor to lower pressure at the surface. The friction caused by the gas bubble pushing up the pipe and displacing the drilling mud used to control the pressure could have created a static charge that ignited the gas into a fireball.

Offshore oil operations in deep water is not a safe business. Safer than it used to be, but the pressure at depth is an added element to an already hazardous operation.

About the Navy: From TheHill.com:


Defense Secretary Robert Gates on Monday warned that the shipbuilding budget is unlikely to continue growing and urged the Navy and Marine Corps to ready for new challenges posed by modern militaries using unconventional tactics and terrorist groups with advanced weapons.

“We have to ask whether the nation can really afford a Navy that relies on $3 [billion] to $6 billion destroyers, $7 billion submarines and $11 billion carriers,” Gates said during a speech at the Navy League’s annual Sea Air and Space symposium.
***
“We simply cannot afford to perpetuate the status quo that heaps more and more expensive technologies onto fewer and fewer platforms — thereby risking a situation where some of our greatest capital expenditures go toward weapons and ships that could potentially become wasting assets,” Gates said.

Gates called for shifting investments toward long-range unmanned aircraft and intelligence, surveillance and reconnaissance capabilities; new sea-based missile defenses; a submarine force with expanded roles that is prepared to conduct more missions “deep inside an enemy’s battle network”; and an increase in submarine strike capabilities as well as the development of smaller and unmanned underwater technologies.

Gates decried the erosion of the U.S. edge on precision-guided weapons, in particular the long-range, anti-ship cruise and ballistic missiles.

“This is of particular concern with aircraft carriers and other large, multibillion-dollar blue-water surface combatants, where, for example, a Ford-class carrier plus its full complement of the latest aircraft would represent potentially $15 [billion] to $20 billion worth of hardware at risk,” Gates told the Navy League audience.

Gates said that potential adversaries are aware of the unparalleled advantage the U.S. Navy has with its destroyers, carriers, amphibious ships, destroyers and submarines. That is why none of them, despite investing in their naval programs, “intends to bankrupt themselves by challenging the U.S. to a shipbuilding competition.”

Instead, potential adversaries are investing in weapons designed to neutralize U.S. advantages by threatening American sea and air assets as well as their supporting networks.

Time for a "bi-purposed" fleet?


The “New Navy Fighting Machine” promotes a wider mix of ships, in a more numerous fleet, with better-focused capabilities, to meet a range of scenarios in green and blue water environments. The new fighting machine does this within an affordable SCN (Ship Construction Navy) budget ceiling, because the U.S. defense budget already dominates defense spending in the rest of the world.

The fleet’s new component is a green water force of small vessels to fulfill the three sea service chiefs’ maritime strategy of collaboration and support of theater security operations now manifested in Navy global fleet stations. The green water force also includes coastal combat forces, and additional reconnaissance for the land and sea side of a littoral. These capabilities are achieved with 10% of the SCN budget.

Although our green water fleet of about 240 vessels is more attuned to the needs of the nation than anything else we have seen, the composition can be no more than a supposition, because of the intricacy of the operations described herein. For example, the green water component also includes an additional 400 affordable and easy-to-operate inshore patrol craft to help build up the capabilities of some countries without navies or coast guards.

Captain Hughes proposes 10% of the shipbuilding budget be devoted to national security assets such as ballistic missile submarines, 10% for the "green water" force and 80% for the blue water fleet:


The blue water fleet is the essential foundation of American sea power’s three great rewards: first, the nation’s ability to project power and influence from the seas; second, the flawless, loss-free delivery of forces for every large or small land engagement overseas since World War II; and third, U.S. Navy popularity among all friendly nations of the world as their guarantor of safe sea lanes for trade and prosperity.

Cost reductions are realized, in part, by developing a non-nuclear submarine component of air-independent design (allowing more hull for the buck), shifting the focus from amphibious assault to "amphibious lift". Hughes sees Navy manning levels remaining about the same, despite an increase in the number of hulls in the water to about 650 - many smaller ships with smaller crews and spreading eggs into many, networked, competent platforms.

As usual, the key is quality training: 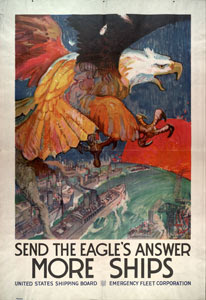 But, in a different way, the training must be just as sophisticated. Examples are (1) the need to prepare junior commanding officers of patrol craft in the art of theater security and nation building; and (2) the return to professionalism in warships devoted to mine warfare, antisubmarine warfare, and countering swarms of small missile boats—as compared to the well-developed capability to deliver accurate strikes ashore. There is time to change the training as the new fleet is produced, but only if both the different tactics and new training are developed simultaneously with the new operational emphasis.

Something needs to be done. My view is that a a bi-purposed fleet is good concept if there are leaders to take us there. More ships is always good. "Send the Eagle's Answer!"

UPDATE: France seems to get it: Anti-piracy patrol ship:

The 90-metre (295-foot) vessel is planned have a top speed of 21 knots (39 km/hr, 24 miles/hr) allowing for rapid manoeuverability to conduct boardings by commandos or coast guards.

The ship, to be manned by a crew of 30, is to have range of 8,000 nautical miles, have a helicopter pad and be able to handle drones, and cost around 30 million euros (39 million dollars) .