Please join us at 5pm 3 December 2017 for Midrats Episode 413: Global Naval Power at the End of the 2nd Decade of the 21st Century: 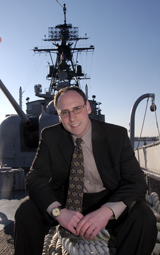 December, and let it soak in that it will be 2018 in less than a month.

That means that we are officially well in to the end of the second decade of the 21st Century. It is time to look at the latest global feet developments breaking this year, and to what should shape discussions next.

From Argentina's missing submarine, submarine proliferation around the world, Asias growing naval powers, Russian naval capabilities, European naval trends, and US naval systems/vessels capabilities - we are going to touch on them all with returning guest Eric Wertheim

Eric is a defense consultant, columnist and author specializing in naval and aviation issues. He was named to the helm of the internationally acknowledged, one volume Naval Institute reference Combat Fleets of the World in 2002.

He has served as an advisor or contributor on dozens of studies and reports conducted by the Department of Defense and North Atlantic Treaty Organization, and from 1994 through 2004 Mr. Wertheim wrote the bimonthly "Lest We Forget" column on historic U.S. warships for the Naval Institute's Proceedings magazine. He is a graduate of American University in Washington, D.C.

Since 2004, Eric Wertheim has written the monthly "Combat Fleets" column for Proceedings, and his annual review of world navies runs in the March issue of the magazine. He is the coauthor with Norman Polmar of the books,Chronology of the Cold War at Sea and Dictionary of Military Abbreviations, both published by the Naval Institute Press.

Email ThisBlogThis!Share to TwitterShare to FacebookShare to Pinterest
Labels: Midrats, Midrats on Blogtalkradio, Midrats on iTunes, Midrats on Stitcher