A ship carrying 22 Indian crew members and 13,500 tonnes of gasoline is still missing in the Gulf of Guinea; contact was lost in Benin on Friday, the company and India's minister of external affairs said on Sunday.
The Gulf of Guinea is increasingly becoming a target for pirates who steal cargo and demand ransoms, even as piracy incidents fall worldwide, experts say.

The Marine Express tanker, managed by Hong Kong-based Anglo-Eastern, was last seen in Benin's waters at 3.30am GMT on Friday after which contact was lost, an Anglo Eastern spokesman told Reuters. 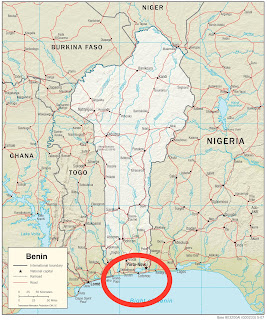 According to Hellenic Shipping News:


Anglo Eastern, managers of the 45,989 dwt oil products tanker “Marine Express”,(IMO 9403322) report that contact has been lost with the vessel which was at the Cotonou Anchorage, Benin.


Nearby map shows area in question in the red oval off Benin in the Bight of Benin, a portion of the Gulf of Guinea.


The Anglo-Eastern company reports on Facebook that the entire 22-person crew was "safe and well," and that they even managed to keep the entire cargo of 15,120 tons of gasoline intact. The crew and captain regained control of the Marine Express tanker at 4 p.m. Singapore time on Monday, according to the Hong Kong-based company.

"A complete investigation will be carried out into the hijacking and we wish to express our gratitude to the captain and crew of the vessel and their families for their courage and fortitude in dealing with this difficult situation, as well as to all of the authorities and agencies involved," the company wrote on Facebook.
Sushma Swaraj, India's Minister of External Affairs, tweeted that "I am happy to inform that Merchant Ship Marine Express with 22 Indian nationals on board has been released."