This Sunday we're going to focus on the things of nightmares; Anti-
Ship Cruise Missiles and Anti-Ship Ballistic Missiles with fellow paleo-milblogger SteelJawScribe.


In a wide ranging discussion, for the hour we'll cover ASCM history, Cold War tales, and what present day Russia and Crimea are bringing to the game. 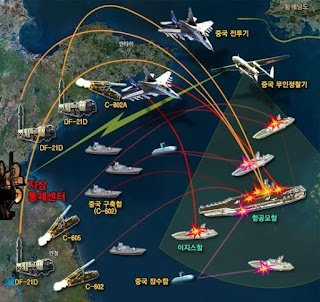 SJS is a retired Navy Captain with multiple operational tours, including command of the VAW-122 Steeljaws, flying the E-2C Hawkeye as a Naval Flight Officer. With over 3500 hrs in type and 525 carrier arrested landings he was a designated Mission Commander, NATOPS and PMCF check flight NFO, a NATOPS qualified NFO copilot and the first CVW strike lead from the VAW community. He also was navigator on the USS DWIGHT D. EISENHOWER (CVN 69).

Shore tours included time at the Naval Postgraduate School in Monterey, CA where he earned a Masters (with honours)in National Security Studies (Russia) and multiple joint penance tours working operational/technical intelligence, collection management and strategy/policy. Following retirement he worked in industry, first in BMD supporting the Missile Defense Agency and then helping establish the Navy Air and Missile Defense Command in Dahlgren VA. As the Navy’s premiere center for all things associated with ballistic and fleet air defense, NAMDC became the IAMD division (Dahlgren) of the Surface and Mine Warfighting Development Center (SMWDC) in 2015, where SJS works today after transitioning to govt work.

An honours graduate of the Naval War College, SJS also teaches 2of 3 JPME-1 courses as a Fleet Seminar Program professor and is a published author. Together with his wife Sharon and their fearless dachshund, Jake, they live in Chancellorsville, VA