As AEI put yesterday, Happy 89th birthday (June 30) to Thomas Sowell, one of the greatest living economists providing some great examples of his clear thinking: 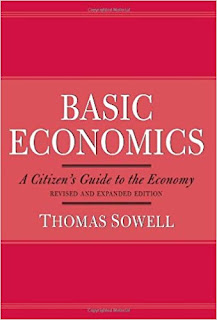 Diversity. “If there is any place in the Guinness Book of World Records for words repeated the most often, over the most years, without one speck of evidence, “diversity” should be a prime candidate. Is diversity our strength? Or anybody’s strength, anywhere in the world? Does Japan’s homogeneous population cause the Japanese to suffer? Have the Balkans been blessed by their heterogeneity — or does the very word “Balkanization” remind us of centuries of strife, bloodshed and unspeakable atrocities, extending into our own times? Has Europe become a safer place after importing vast numbers of people from the Middle East, with cultures hostile to the fundamental values of Western civilization?

“When in Rome do as the Romans do” was once a common saying. Today, after generations in the West have been indoctrinated with the rhetoric of multiculturalism, the borders of Western nations on both sides of the Atlantic have been thrown open to people who think it is their prerogative to come as refugees and tell the Romans what to do — and to assault those who don’t knuckle under to foreign religious standards.

It has not been our diversity, but our ability to overcome the problems inherent in diversity, and to act together as Americans, that has been our strength.” (emphasis added)


More from other sources:


"It is hard to imagine a more stupid or more dangerous way of making decisions than by putting those decisions in the hands of people who pay no price for being wrong."

“Unfortunately, the real minimum wage is always zero, regardless of the laws, and that is the wage that many workers receive in the wake of the creation or escalation of a government-mandated minimum wage, because they lose their jobs or fail to find jobs when they enter the labor force. Making it illegal to pay less than a given amount does not make a worker’s productivity worth that amount—and, if it is not, that worker is unlikely to be employed.”

“Socialism is a wonderful idea. It is only as a reality that it has been disastrous. Among people of every race, color, and creed, all around the world, socialism has led to hunger in countries that used to have surplus food to export.... Nevertheless, for many of those who deal primarily in ideas, socialism remains an attractive idea -- in fact, seductive. Its every failure is explained away as due to the inadequacies of particular leaders. ”


“Socialism in general has a record of failure so blatant that only an intellectual could ignore or evade it.”