Interesting piece in Foreign Affairs, The Revolutionary Guards Are Poised to Take Over Iran:

That Iran will soon have a military-run government is not a foregone conclusion, 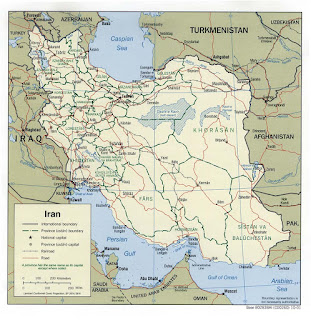 but it seems increasingly to be the most likely. Iranians are frustrated with partisan tensions and compounding crises. U.S. sanctions have drained the country’s economic lifeblood: purchasing power parity has decreased to two-thirds of what it was a decade ago, even as the public’s obsession with wealth has grown exponentially. Wounded pride and resentment that Iranians cannot enjoy the international prestige they deserve is giving rise to a novel form of nationalism.

President Hassan Rouhani, unable to deliver on either his domestic or foreign policy promises, has apparently thrown in the towel, as his recent management of the pandemic indicates. He was reluctant to recognize the novel coronavirus as a national threat until it was too late, and his contradictory messages on the subject confused the public and even garnered criticism from the supreme leader. By comparison, the IRGC holds a strong hand that is growing only stronger. But the very nature of its advantages may militate against its becoming the custodian of the state.

The IRGC presents itself as the cure for Iran’s national malaise, but it is in fact a big contributor to the problem. Its regional exploits dim the country’s prospects for sustained and steady development. Under U.S. sanctions, the IRGC expanded an underground economy, complete with a new corrupt elite of “smuggling entrepreneurs.” The IRGC prevents the government from recruiting experts whom it deems politically unfit, and it derails government policies and projects at will. All the while, it issues propaganda insisting that politicians and bureaucrats are to blame.