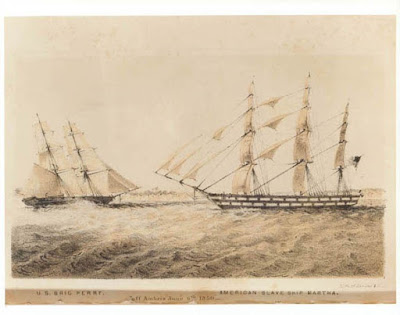 Anti-slavery Operations of the US Navy

Long illegal, the infamous slave trade was declared by Congress in 1819 to be piracy, and as such, punishable by death. The Navy's African Slave Trade Patrol was established to search for and bring to justice the dealers in human misery. Never exceeding a few ships in number, the Patrol, which from time to time included USS Constitution, USS Constellation, USS Saratoga and USS Yorktown, relentlessly plied the waters off West Africa, South America, and the Cuban coast, a principle area for slave disembarkation. By the start of the Civil War more than 100 suspected slavers had been captured.

Britain attempted to stop slavery by legislation in 1807, and enacted stronger measures in 1827, declaring that participation in the slave trade was piracy and punishable by death; slavery was made illegal in the British Empire in 1833.

Interesting note on where slaves were landed from historian Henry Lois Gates, Jr.:

In the 360 years between 1500 and the end of the slave trade in the 1860s, at least 12 million Africans were forcibly taken to the Americas - then known as the "New World" to European settlers. This largest forced migration in human history relocated some 50 ethnic and linguistic groups.

Only a small portion of the enslaved - less than half a million - were sent to North America. The majority went to South America and the Caribbean. In the mid-1600s, Africans outnumbered Europeans in nascent cities such as Mexico City, Havana and Lima.

The Foote booklet referenced in the second video (at 1:06:18) can be found at African Squadron: Ashburton Treaty: Consular Letters

The American Flag has become deeply involved in the slave traffic. Of this as you are aware, from the reports of our officers on the African and Brazil stations and from our diplomatic agents in Rio de Janeiro, there is abundant evidence in the Navy and State Departments. To correct this abuse, and with the design more effectually to suppress the slave trade, Senator Clayton, at the last session, introduced a bill denying consular sea-letters to American Vessels when sold abroad, provided such vessels were bound to the coast of Africa. This wise and beneficent measure was adopted, the bill passing the Senate unanimously. It is greatly to be deplored that the same bill was not immediately taken up and passed by the House of Representatives.

It may be well here to remark in reference to sea-letters, that on the sale of an American vessel in a foreign port to an American citizen, the register of the vessel, which is her proof of nationality, cannot be transferred with the vessel itself; but a sea-letter, which is merely a transcript of the register and bill of sale with the consular seal appended, is given by the Consul as a substitute for said register for the purpose of nationalizing the vessel.

The greatest abuse of our flag has arisen from the facility with which these consular sea-letters have been obtained. More than two-thirds of the slavers on the African coast claiming American nationality, as may be found in documentary evidence, have been provided with this sea-letter. Or in other words, American vessels when sold abroad, have had their nationality perpetuated by this consular sea-letter for the express purpose of being employed in the African slave trade. And surely, when the evil arising from the issuing of this document becomes as well understood in the House, as it has been in the Senate, it may be supposed, that the bill, denying said sea-letters to African bound vessels, will also be passed unanimously by that body.