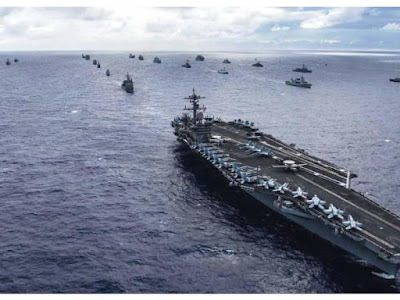 Please join us on 5 December 2021 for a special 4pm (EST) edition of Midrats for Episode 610: Presence & Command of the Sea, with Robert “Barney” Rubel

Both history and common practice show that the most fundamental role of a major power’s naval forces is to “show the flag.” The world’s premier naval power has additional responsibilities if it wishes to remain the premier power; command of the seas.

From material condition of our ships to failures of basic seamanship, the last few years have signaled that whatever we are doing, it isn’t being done in the best service of the nation or its Navy.

As we face an accelerating challenge from the People’s Republic of China at sea, do we need a fundamental re-look at how we run our Navy?

Our guest for the full hour to discuss this and related topics he raises in the article, “Think Differently about Naval Presence” in the December 2021 Naval Institute Proceedings, will be Robert C. “Barney” Rubel, CAPT, USN, Ret.).

Captain Rubel served 30 years on active duty from 1971-1991 as light attack/strike fighter aviator. He commanded VFA-131 1990-91 and ashore served three tours at Naval War College teaching planning and decision making. After retirements, he was brought on as a civilian analyst in wargaming 2001 and was Director of Wargaming 2003-2006, Dean of the Center for Naval Warfare Studies 2006-2014, and Advisor to CNO 2015-2021.

He directed the 2006/7 NWC research effort that supported development of CS21 and is the author of over 30 journal articles, book chapters, and more.