Interesting (and pause-giving) article from Paul Hidalgo at Foreign Affairs "Why the Showdown Between Kenyatta and Odinga is Empowering al Shabaab":


The current political upheaval and conflict in Kenya could not have been better scripted for the Islamist militant group al Shabaab. Its continued attacks have successfully pitted the country’s two top politicians, President Uhuru Kenyatta and his main rival, Raila Odinga, against each other in a high-stakes game of political brinkmanship that could plunge Kenya into another toxic ethnic conflict -- exactly the kind of environment in which a group like al Shabaab can thrive.
***
Al Shabaab is relishing every moment. A divided Kenya is ideal for the militant group. With the Kenyan political elite consumed by infighting, and with security forces busy keeping the peace (or picking sides), the already porous Kenya–Somalia border would all but dissolve, giving al Shabaab fighters free reign as they strengthen their bases and increase recruitment efforts in Kenya.
*** 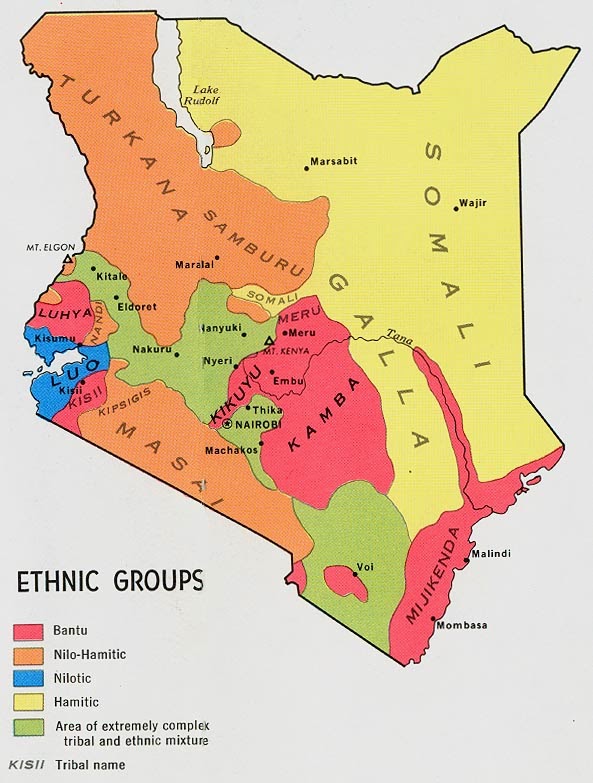 You can read the whole thing with a free registration.

Kenya has been an ally in the Long War Against Terrorist Groups (LWATG), its disintegration into warring faction would be . . . "unhelpful."

As you can see from this old (1974) map, there is a tribal flavor to Kenya and there are a grunch of Somali refugees sitting in Kenya.

A sort of background article (from a sort of "leftist" view) from 2008 Beyond 'Tribes': Violence and Politics in Kenya:


When Nobel Prizewinning author Ngugi wa Thiong'o says that the present conflict is more about class than ethnicity, he is right. Talk of "tribes" is essentially a cover for more basic class divisions that have been exacerbated, first by colonial and more recently by corrupt governments in Kenya.

While the author points the finger at "global capitalism" as setting the table for economic chaos in Kenya, one could argue from the same set of data that the issue was the stifling of capitalism by the various governments that have held power in Kenya due to corruption and other factors, especially self enrichment by government agents through bribery:


Bribes at every level—from those collected from small business owners by impecunious police whose government pay has been siphoned off by corrupt officials up the line, to those paid by the middle class to obtain licenses of some kind, to those paid by international contractors/corporations in order to be treated preferentially in Kenyan business contracts—have also impeded the achievement of a stable prosperous economy.

Indeed, governmental corruption has contributed directly to the current breakdown of order in Kenya. With funds diverted to further enrich the rulers, the government has left its citizens at the mercy of all forms of violence. Several years ago in northern Kenya there was a cross-border attack from Ethiopia caused by intra-clan camel and cattle rustling that resembled strongly the better publicized Darfur raids. The feud resulted in a massacre in which an Ethiopian branch of a clan, related to those attacked, destroyed a Kenyan village, killing all of its inhabitants. One of the victims had the presence of mind to call the police on his cell phone, but it took three hours for the police to arrive because they did not have a vehicle. Money for such things usually disappears before reaching those whose job it is to keep order. The only survivors were two persons buried alive in a pile of bodies.

It hardly seems fair to blame "international capitalism" for every corrupt official who stands in the path of local business owners making their way. Be that as it may, the author does note:


Fast forward to post-independence and contemporary Kenya. When Kenyatta followed ethnic preferences in the redistribution of land that took place after independence, much of the land went to a small Kikuyu elite. Some established or took over highland plantations and continued to employ locals as labor. President Moi, in particular, during his long reign shamelessly created, manipulated, and advertised "tribal" loyalties in an effort to control the population and enrich certain powerful social groups.

So, the local government decides to exploit a system that allows a small minority to push down larger groups for the minorities benefit? I think there is a term for this - "oligarchy"


Kenya has been hampered by corruption and by reliance upon several primary goods whose prices have remained low. Low infrastructure investment threatens Kenya's long-term position as the largest East African economy, although the Kenyatta administration has prioritized infrastructure development. International financial lenders and donors remain important to Kenya's economic growth and development. Unemployment is high at around 40%. The country has chronic budget deficits. Inflationary pressures and sharp currency depreciation peaked in early 2012 but have since abated following low global food and fuel prices and monetary interventions by the Central Bank. Recent terrorism in Kenya and the surrounding region threatens Kenya's important tourism industry. Kenya, in conjunction with neighboring Ethiopia and South Sudan, intends to begin construction on a transport corridor and oil pipeline into the port of Lamu in 2014.

How much that "bit" is - well, al Shabaab lurks.

By the way, there is another article at Foreign Affairs now worth contemplating, State of Imbalance: Why Countries Break Up
by Benjamin Miller:


There seems to be little connecting recent violence in the former Soviet space to ongoing bloodshed in the Middle East. In one place, a neo-imperialist power is attempting to reassert itself in a region that it ruled not so long ago. In the other, sect-based militant groups are grabbing up territory by the mile.

Even so, both conflicts spring from a common source, as do a host of other major conflicts around the world. In each, there is a mismatch between state boundaries and national identities -- a state-to-nation imbalance. The state is a set of institutions that administer a certain territory; the nation is made up of people who, in their view, share common traits (language, history, culture, religion) that entitle them to self-rule.

Are we simply kiving in a time of a realignment of states and national identities? Read the whole thing.