TANSTAAFL, "There Ain't No Such Thing as a Free Lunch" and the Defense Budget

David R. Henderson, TANSTAAFL, There Ain't No Such Thing as a Free Lunch

About 42 or so years ago, an "Intro to Economics" course I observed used a book tited Tanstaafl (There Ain't No Such Thing as a Free Lunch) - A Libertarian Perspective on Environmental Policy by Edwin Dolan. Here's a portion of the introduction:

Just as a thought experiment, try pondering how "free" healthcare is provided.

But, hey, this is post about National Defense! So how does TANSTAAFL apply?

Okay, how about this?


[President] Obama last week requested $3.7 billion from Congress to respond to the flow of children crossing the border but that did not include additional funding for the military, which is housing thousands of immigrant children and trying to contain the violent drug trade.

Regardless of the merits of spending $3.7 billion on people entering the U.S. illegally, there is the question of the tradeoffs the military must make in "housing thousands of immigrant children and trying to contain the violent drug trade." After all, the military is a scarce resource that must always tradeoff resources to accomplish its missions. What missions will be sacrificed to bear the costs associated with these children? Do we want to fire thousands of highly trained people to allow the budget to balance?

If you want to see how that plays out, look at the suggested economic impact (tradeoff) on some of the communities that surround military bases.


With those losses, yearly income in the area is expected to fall by 7.7 percent, or $986.6 million. Total reduction in sales is estimated at $768.6 million with a corresponding loss in sales tax receipts in both Tennessee and Kentucky estimated at between $7.4 to $11.6 million annually.

Sorry, FT Campbell, we need that money for other things more important than your local economy.

Or how about Langley AFB which has some 742 position cuts proposed?:


The plan does not break down the 742 positions between military and civilian personnel.

"It does not mean 742 people at Langley are losing their jobs," said Capt. Erika Yepsen, an Air Force spokeswoman. "It means that 742 positions are coming off the books."
***
It should be considered "a disappointment to the local economy," but just how much remains to be seen, said Bruce Sturk, director of federal facilities support for the City of Hampton. It comes one week after the Army announced a potential cut of up to 4,200 people at Fort Eustis in Newport News should deep spending reductions return in 2016.
***
The positions cut at Langley are part of a plan to reduce 3,459 positions in the Air Force, both in the U.S. and overseas. It is designed to save $1.6 billion in the next five years, but the positions will be limited sooner than that, said Air Force Secretary Deborah Lee James.

A billion here, a billion there, pretty soon you can afford to "respond to the flow of children crossing the border."


The looming hit to the shipbuilding budget from the Navy’s plan to build 12 new nuclear ballistic missile submarines resulted in the cancellation of a fourth flight of Arleigh Burke destroyers (DDG-51) as well as the controversial plan to layup 11 Ticonderoga-class guided missile cruisers (CG-47), the navy’s chief shipbuilder told a congressional panel in a recent hearing on cruiser and destroyer modification.

The shifts in the Navy’s large surface combatants come as the $100 billion bill for the 12 new boomers begin to take up more and more of the Navy’s shipbuilding budget — leaving less and less for other shipbuilding programs.

You know, someone has to decide - which is more important - a new bunch of destroyers we want to replace anyway or 12 new boomers? Ah, well, boomers. Sorry, there, surface Navy, but . . . make do, make do.

Got a scarcity of ships? Well then, make them deploy longer to meet the identified needs. See 8-month deployments become the 'new norm':

Navy officials strenuously objected to that notion of routine, longer deployments two years ago, but cruises continued to creep longer.

Indeed, the strain sailors have felt in the past few years is backed up by newly released Navy data showing the fleet’s deployment pace recently spiked to record levels, a flux littered with long cruises and short turnarounds that is upping wear and tear on sailors and ships.....

Now, like anyone else who has suffered through a budgeting process, I know that deciding priorities is hard. Very hard. Especially when you are broke. But when you are broke, you need to learn to say "no" to things you can't afford so that you can eventually say "yes" to things that you need.

The key to budgeting is deciding what you what the end result to look like ("Given the obligations we face around the world, we need 340 ships of the following types to be in place by 2020" or "While we can make do with an active army force of 440,000, we need a strong reserve component for activation on short notice and we need to pay to maintain that force.").

Then that budget has to be sold to the funding agent - Congress. Because National Defense is written into the Constitution, it ought to have a higher priority than non-Constitutional wants. On the other hand, someone in Congress should keep the military honest in its planning and risk assessment work.

Sadly, the tradeoff many Congressmen make in the defense budgeting process is making sure their state or district get its share of the pie.

Now, if you wonder that suggested big cuts to a major base in Kentucky have anything to do with the Senate minority leader being from that state and running for re-election, you might be a little cynical. Maybe. 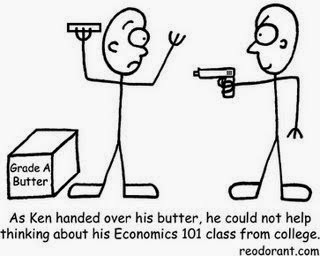