Three U.S. Navy ships and a Marine helicopter were harassed during a night transit of the
Strait of Hormuz on Tuesday, U.S. 5th Fleet officials told USNI News on Wednesday. 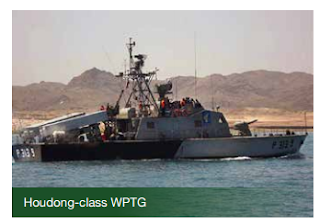 “Shortly thereafter, the Iranian vessel trained a laser on a CH-53E helicopter that accompanied the formation,” U.S. 5th Fleet spokesman Cmdr. Bill Urban told USNI News on Wednesday.
“The Iranian vessel then proceeded to turn its spotlight on Bataan, scanning the ship from bow to stern and stern to bow before heading outbound from the formation.”

The encounter was, “unsafe and unprofessional due to the Iranian vessel shining a laser on one of the
formation’s helicopters. Illuminating helicopters with lasers at night is dangerous as it creates a navigational hazard that can impair vision and can be disorienting to pilots using night vision goggles.”

Latest in a series of Iranian tactics to "bother" the U.S.Navy as they enter the Arabian Gulf. Worth noting that these missile boats are part of the Iranian Revolutionary Guard Navy, not the IRI Navy or at least they have been. . .

Probably just a bored crew of the Iranian boat looking for a little, albeit safe fun.

More info on the Iranian Navy and the IRGC Navy available from the U.S.Navy's Office of Naval Intelligence here.

On the other hand, the relationship between Iran and China seems to be going swimmingly. Report by Fars News Agency (Iran) China's Flotilla to Berth at Iranian Port


A Chinese naval flotilla will berth in Southern Iran as Tehran and Beijing maintain their determination to enhance naval cooperation, the Iranian Navy announced.
"The Chinese Navy flotilla will comprise two battle cruisers, a support vessel, and a helicopter," the Iranian Navy’s Public Relations Department said.

It said the Chinese flotilla, which had docked at Pakistan's Karachi port for training purposes, will dock at the Iranian port of Bandar Abbas later in the day.
***
In relevant remarks on Tuesday, Chinese Ambassador to Tehran Pang Sen underlined anti-terrorism cooperation with Iran, adding that the two countries have strengthened their military cooperation and exchanges.

"The military exchanges between China and Iran are increasing day by day," Pang told reporters in a press conference in Tehran.

Stressing that Tehran and Beijing permanently hold talks and consultations on the fight against terrorism, he said, "China opposes any type of terrorism and is willing to bolster its cooperation with Iran and other countries (in anti-terrorism campaign) to jointly maintain regional and global peace and stability."

Elsewhere, Pang described China as Iran's largest trade partner in the past 8 years, and said, "The trade ties between the two countries reached $31bln last year."

In relevant remarks in May, Tehran's Ambassador to Beijing Ali Asqar Khaji announced that Iran's exports to China increased considerably in the first four months of 2017 compared to the same period last year.

"The volume of Iran's exports to China has increased considerably in terms of weight in the first four months of 2017 and amounted to 21.12mln tons, setting a record 31 percent boost compared with the same period last year," Khaji said.

Noting that China is the largest importer of Iran's non-oil products, he said the volume of the country's non-oil exports to China has reached 11.59mln tons, showing a 66% increase compared to the previous year.

Iran exports around 40 percent of its petrochemical products and 60-70 percent of the country’s polymer materials to China.

Email ThisBlogThis!Share to TwitterShare to FacebookShare to Pinterest
Labels: China and Iran, Fun with Iran, Iran Harassment of Shipping