Testing Officers of the Deck: The U. S. Navy and the Royal Australian Navy Approaches

From Navy Times Officers of the deck to undergo competency tests


The Navy has begun randomly testing surface fleet officers on their officer of the deck skills in order to better understand where the community’s strengths and weaknesses lie.

It is part of the surface community’s efforts to assess and revamp training in the wake of fatal collisions involving the warships Fitzgerald and John S. McCain last summer that killed 17 sailors.

***
Forty OOD-qualified first tour division officers were recently selected at random from 10 San Diego ships to undergo the 35-minute assessment, which involves a survey, written test and a simulator scenario, according to a recent Navy blog post by Capt. Scott Robertson, head of the Surface Warfare Officers School, or SWOS.

The tests will take place in the coming months at other fleet concentration points, with the goal of assessing about 200 officers, or a tenth of the fleet’s OOD inventory.

Such a data set will enable the Navy to gauge mariner skills and watch-standing capabilities of its OODs, Robertson said in the post. 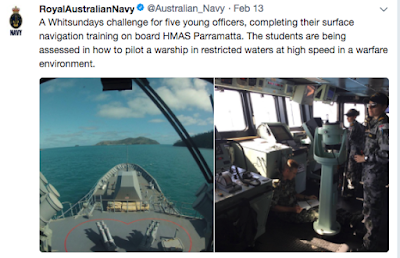 I once witnessed a Canadian Navy ship turn the wrong way during a exercise. Later found out that the OOD was dismissed from their Navy as a result . . . Nothing focuses the mind like that ...

The past few weeks I've been comtemplating what traits make some naval surface ship drivers officers (Officers of the Deck or Junior OODs) better than others. As part of that process I also thought about whether some of those traits can be taught or whether some of them are organic within individuals.

Let me start with an example - one I first used about 12 years ago - in their book Keepers of the Sea Fred Maroon and Edward Beach wrote about replenishment at sea:


...[I]n no fleet maneuver is the steering ability of the helmsman, indeed, the exercise of pure seamanship by all hands so demanding. No evolution is so fraught with potential danger as the high-speed maneuvering of huge ships in close quarters, where the knowledge of one's ship, of the action of the wind and the sea, and of the laws of physics is crucial. At replenishment stations, some individuals seem to have an intuitive awareness of what is happening around them. Such men never seem to lose sight of the ponderously certain outcome of the events they have set in motion. They have eyes in the backs of their heads, a feel for the sea in the tips of their fingers, and the born confidence of a professional juggler or racing car driver. It shows in the way they handle their heavy gear and in the way they drive their ships.."

Why is it that "some individuals seem to have an intuitive awareness of what is happening around them?"

Is there something wrong with the others who apparently lack that "intuitive awareness?" Or is it a learned skill? Can it be taught?


Situational awareness, a familiar term to professional captains and crew, is defined as having a keen sense of the events and conditions around us, and the ability to apply our awareness of those events to our situation. simply put, it’s knowing what is going on around you.

The article from which that definition comes notes that Admrial Moran stated that in the recent incident of USS Fitzgerald,


According to the Navy’s Admiral William F. Moran, vice chief of naval operations, in the case of the USS Fitzgerald, “the sailors who were on watch in the ship’s bridge lost situational awareness, contributing to the collision.”

A discussion of aircraft pilot and situational awareness notes,


Put simply, situational awareness (SA) means appreciating all you need to know about what is going on when the full scope of your task - flying, controlling or maintaining an aircraft - is taken into account. More specifically and in the context of complex operational environments, SA is concerned with the person's knowledge of particular task-related events and phenomena. For example, for a fighter pilot SA means knowing about the threats and intentions of enemy forces as well as the status of his/her own aircraft. For an air traffic controller, SA means (at least partly) knowing about current aircraft positions and flight plans and predicting future states so as to detect possible conflicts. Therefore, in operational terms, SA means having an understanding of the current state and dynamics of a system and being able to anticipate future change and developments.

A general definition of SA is that it is the perception of the elements in the environment within a volume of time and space, the comprehension of their meaning and the projection of their status in the near future.

In the U. S. Navy surface force, we used to use the term "forehandedness" to describe what amounts to SA. As Stavrides and Girrier put in the 15th Edition of the Watch Officer's Guide:


The watch officer should be ready for any situation. For that reason, the most important faculty for the watch officer to cultivate is forehandedness. If there is reason to think that there will be fog during a watch, he or she should check over the fog procedure before taking the deck. If the ship is to take part in fleet exercises, the watch officer should arrange to study the orders, pre-exercise messages (PRE-EXs) , and applicable instructions before going on watch . . . The watch officer must always look ahead - a minute, an hour, and a day - and make it a matter of pride never to be caught unprepared.

The wise watch officer will mentally rehearse the action to take in event of a fire, a man overboard, a steering failure, or other sreious casualty. This habit is not difficult to acquire and is certain to pay large dividents. Forehandedness is the mark of a successful watch officer. Specific evolutions of a technical or complex nature should b e pre-briefed in advance with all the major participants atending. The OOD is usually a central figure in these briefings. Proper preparation for complex evolutions not only results in smooth running operations but also keeps them safe.

I note that with our naval aviators, every mission is pre-briefed. I am not sure how many, if any, oncoming watch teams on our ships get together before the watch to discuss what to expect.

The best skippers and OODs constantly challenge their watch standing teams - not to harass them with trivia - but to teach them what are the essential matters that any member of the watch team needs to know. My first CO was always testing the limits of my knowledge - "How far can you see from the bridge?" (You first have to know that height of the bridge above the water . . .) "If you are the burdened ship in a crossing situation at sea and you are going to manuver to avoid a collision, how big should your turn be?" (Big enough so the guy on the bridge of the other ship can see that you've made the turn) "What's the best thing to do if you've lost situational awareness?" (Usually go "all stop" and buy yourself some time to sort things out).

The OOD that, during a quiet watch, announces that the "bridge has lost steering" to test the watch crew's ability to shift steering to after steering and for after steering to take control is being forehanded, as is the CO who tells the XO to toss Oscar, the man overboard dummy, over the side to check the OOD and crew responses.

We've been standing watches in the U. S. Navy for over 240 years. Tech may have changed, but people haven't. What has happened is that many of us depend too much on technology and forget that tech can and will fail at the worst possible moment. As in "Murphy was an optimist." It behooves us to learn to use tech properly while keeping alive forehandedness as "the most important faculty" for our watch officers.

All of which is to say, it speaks volumes that we need to "test" U.S. officers of deck to set a baseline for training because we don't really know what we have.

It also speaks volumes that the RAN "test" (after completion of training) is to throw their JOs into the fray piloting "a warship in restricted waters at high speed in a warfare environment."