Here's a little known tale of how the "environmental" crowd dips into the pocketbook of ordinary Americans while doing little or nothing to improve the environment. You may never have hear of RINS, but here's a lttle background from the EPA to set the table for what follows:


The Renewable Fuel Standard (RFS) program was created under the Energy Policy Act of 2005 (EPAct), which amended the Clean Air Act (CAA). The Energy Independence and Security Act of 2007 (EISA) further amended the CAA by expanding the RFS program. EPA implements the program in consultation with U.S. Department of Agriculture and the Department of Energy.

The RFS program is a national policy that requires a certain volume of renewable fuel to replace or reduce the quantity of petroleum-based transportation fuel, heating oil or jet fuel. The four renewable fuel categories under the RFS are:

The 2007 enactment of EISA significantly increased the size of the program and included key changes, including:

The statute also contains a general waiver authority that allows the Administrator to waive the RFS volumes, in whole or in part, based on a determination that implementation of the program is causing severe economic or environmental harm, or based on inadequate domestic supply.

Here's a handy chart that shows what Congress thinks is a good idea for the total volume of "renewable fuels" in our future: 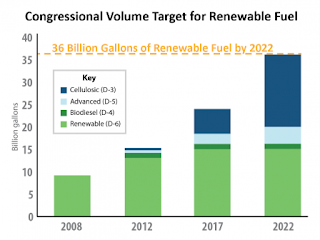 Issues for the Renewable Fuel Standard from Congressional Budget Office

What may you take from that report?


Yeah, exciting stuff. But here's what happens in the real world, the trading of RINS is putting American refineries and refinery workers at risk - which has a potentially serious effect on national security - because without refineries and their workers, where will we get fuel for our aircraft, ships and military vehicles? Senator Cruz of Texas (of course) has taken up this issue as reported by the Oil & Gas Journal in
Time has come to overhaul RINs, Cruz tells Philadelphia refinery workers


US Sen. Ted Cruz (R-Tex.) called for a cap on the price of renewable identification numbers (RIN) to halt speculation and preserve jobs at refineries. "We're here because the jobs, and the men and women whose livelihoods and families depend on those jobs, are at risk from a broken government regulation system that isn't working, and that we have to fix," he said a Feb. 21 rally at Philadelphia Energy Solutions (PES).

PES cited dramatically higher prices for the renewable fuel credits the Environmental Protection Agency administers when the refiner declared bankruptcy nearly a month earlier (OGJ Online, Jan. 23, 2018). "In the year 2012, this refinery-the largest refinery on the East Coast-paid about $10 million for RINs. Then the RINs market broke. The price skyrocketed from 1-2¢ each to as high as $1.40 each," Cruz said.

"This means that last year, in 2017, this refinery spent $218 million buying RINs. That is more than double the payroll of the men and women sitting here," Cruz said. "Now, how many think the refinery should be wasting money on government licenses that don't pay a damned thing rather than paying your salaries? It doesn't make any sense. It is nuts."
***
"Here's the crazy thing: Of the $218 million [PES] paid for RINs, do you know how much ended up in the pockets of Iowa corn farmers? None. The money doesn't go to the corn farmers, and it doesn't go to the ethanol producers. Instead, billions [of dollars] are being made by Wall Street speculators and giant integrated companies that are earning a windfall on this broken regulatory system," Cruz said.

It's been a problem for a while. Here's a NYTimes report from 2016, High-Price Ethanol Credits Add to Refiners’ Woes:


Stiff competition, heavy regulation and high operating costs make for some of the lowest profit margins in the petroleum industry. And in the last year, profits have been even harder to come by because of the global fuel glut that has translated into bargain-basement prices for the gasoline and diesel that refiners produce.

But lately, the game has been tougher still for people like Jack Lipinski, chief executive of CVR Energy, an independent operator of two refineries in Oklahoma and Kansas. The problem involves a soaring cost that is outside of his control.

This year, on top of everything else, CVR Energy will have to spend as much as $235 million on credits for renewable fuels. That is nearly double what the company spent last year on the credits, and it exceeds the company’s total labor, maintenance and energy costs.

Mr. Lipinski blames the federal program that requires CVR to buy the credits, but he also suspects a role by unknown market speculators who may be driving up the costs of the credits.

Finally, it is worth noting who ultimately pays the price for cost increases to refiners - it's the American public, to whom the costs are passed on with higher gas and diesel prices at the pump.

By the way current retail gas price hikes are related to the refineries performing maintenance and shift over to producing different blends of gas for the warmer season to come.
Posted by Mark Tempest at 3/06/2018 12:58:00 PM