Please join us at 5pm EDT on 1 July 2018 for Episode 443: Marines in the Offensive Against ISIS 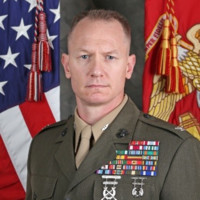 fight a conventional land battle again after years of a focus on counterinsurgency. Fighting against an enemy who is holding territory, has a capital, armor, artillery and a proven record in the battlefield.

While some are writing it, others have been living it, fighting side by side with traditional allies and new ones in a complicated joint and combined environment that is the latest chapter in the Long War; the war against the Islamic State in Iraq and Syria.

Our guest is returning to Midrats after just returning from leading Marines in the fight, Colonel Seth Folsom, USMC.

Colonel Folsom is a Marine Corps infantry officer with 24 years of commissioned service. He currently works on the staff of I Marine Expeditionary Force, and he has commanded Marines in Iraq and Afghanistan at the company, battalion, and task force level. He is a graduate of the University of Virginia, the Naval Postgraduate School, and the Marine Corps War College, and he is the author of three books about his Marines fighting The Long War. He and his family live in Oceanside, California.