Garbage In, Garbage Out: "Premature Death" and Environmental Policy

Excellent explanation of the problems with the EPA using "premature death" as a component of its cost-benefit calculations.

Bob Tippee editor of the the Oil & Gas Journal:


On the basis of this approach, I would think the City of San Francisco might be in trouble for the "premature deaths" caused by homeless pollution.

Already California has been fined for issues caused by the pollution emitting from the homeless. See Feces, blood, syringes at California Capitol: Workers unprepared for clean up, OSHA says:


Capitol Park groundskeepers, who usually maintain shrubbery and repair park facilities, complained that they were expected to clean blood and fecal matter left in the park. The workers said they were given pressure washers, which can atomize the waste and expose the groundskeepers and passers-by to blood-borne diseases, said Steve Crouch, director of public employees for the International Union of Operating Engineers. He filed the complaint on behalf of the workers on March 15.

“Over the past several years, the homeless started spending more time at Capitol Park around trees and bushes, woody areas,” said Crouch. “In the evenings, they spend the night, and they leave debris and garbage.”

and, without vouching for this following site, its links are valid 16K Complaints Related To Fecal Matter Reported In A Week: San Francisco has created a sanctuary of filth:


Things are going down the drain in San Francisco…or not. In just the last seven days, the city that only two days ago found a 20 lb. bag of human excrement left in the hot sun has logged over 16,000 feces-related complaints, according to Newswars and KRTV. The outhouse conditions and other factors have already cost the California cesspool millions in lost business, and the situation only getting crappier.

There is an even a website related to the city’s scatological nightmare that actually records the town’s “non-emergency” requests. If the word “feces” is typed into the site’s search engine, 16,015 (as of this posting) instances come up. Of course, there are many other terms for the stench and those words give thousands of more instances. The sanctuary city is an outdoor outhouse as the wealthy liberals who allowed it to happen live far away from the aroma that they’ve created with their policies, and residents are just now realizing the cost.

The homeless and their encampments are the major problem. While many citizens have no qualms about allowing a vacant lot to lose a few tax dollars to house the unfortunate, the process of human bodily functions is often forgotten about (at least until the smell hits them and wrestles their nostrils a bit).

Going to the SF City website SF311 and entering the word "feces" came up with this very partial listing: 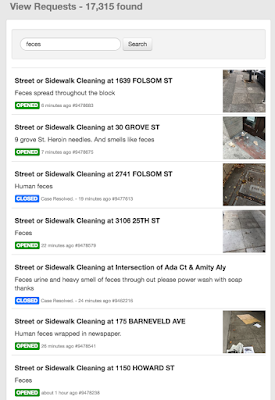 I wonder what this is doing to those citizens not wearing hazmat suits and not taking care to not spread the contamination airborne when using power washers or garden hoses to clear their sidewalks. Perhaps the EPA could do an audit of the lack of sanitation in SF is doing to the people there. The millions in lost tourist dollars doesn't seem to have the impact that worrying over "premature deaths" seems to have.

I doubt SF is the only city in the US dealing - or seemingly, not dealing, with such issues.

Email ThisBlogThis!Share to TwitterShare to FacebookShare to Pinterest
Labels: Environmental Stupidity, Fun with the Environment