The last quarter of the 19th Century, the Gilded Age, was a period of breathtaking change in society, technology, politics and industry. This rapid change helped drive the intellectual and institutional change that brought the US Navy to the world’s attention in the Spanish-American War of 1898. 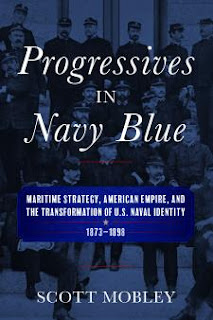 The first two decades of the 20th Century are generally called the Progressive Era, but that only took place due to the advance of progressive ideology the quarter century prior during the Gilded Age.

Our guest for the full hour to discuss these and related issues raised in his new book, Progressives in Navy Blue: Maritime Strategy, American Empire, and the Transformation of U.S. Naval Identity, 1873-1898, will be Scott Mobley, CAPT, USN (Ret).

Scott also serves on the U.S. Naval Institute Naval History Advisory Board and is a founding editor for Voices & Visions, an open-access online reader featuring primary media sources that illuminate the history of U.S. foreign relations.