Before the U.S. Navy stopped this program, it provided small ships like destroyers with a stand-off ASW weapon. 160 ships underwent a modernization 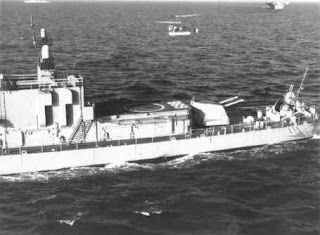 program to allow them to carry DASH.

As you can see, DASH was not a big aircraft, and its counter-rotating rotors eliminated the need for a vertical tale rotor to stop it from spinning like a top . . .

More about DASH from its manufacturer, Gyrodyne from which the above photo was liberated with a hat tip. The DASH history is of particular interest.

As noted a couple of years ago here, such aircraft are not a new idea, though the electronics have improved considerably.

Background of the TDR Drone.