When discussing how large the U.S. Navy should be, the place to start is how big the fleet is now and, importantly, what that ships make up that fleet. It would be easy to assume that a fleet of 250 ships consisted entirely of those classes of ships capable of offensive and defensive combat operations. A quick glance at the numbers and classes below ought to dispel that idea.

Let's dissect the list. At the bottom of the list are USS Constitution and AGER2. AGER2 is the USS Pueblo, which, while commissioned, is held by the North Koreans, as it has been since it was seized by them in 1968. Constitution is the oldest commissioned ship, one of the great three masted frigates, first commissioned in 1797. As the charts indicate, she in the only active frigate currently in the Navy inventory.

There are 11 MCM (Mine Countermeasure ships) and 32 amphibious ships on the list, 5 "Fleet Support" ships (2 submarine tenders, 2 Command ships and one ESB (Expeditionary Sea Base). All valuable ships but all are not capable of going unescorted into areas of threats. The Navy would like to rid itself of the MCMs.

In addition, there are currently 19 LCS class ships. 4 of these, having proved - um- useful as technology test beds, are soon to be decommissioned. More are being built, which will eventually push their number to 30. However, these ships have minimal manning and are awaiting the final versions of the various modules which were supposed to make them capable of filling several mission areas, mine hunting, inshore ASW, and countering fast moving small craft. They are not designed to go toe-to-toe with destroyers and cruisers, nor do they have the anti-air warfare systems possessed by other combatants, though improvements have been made, including the addition of the 100 mile ranged Naval Strike Missile. Though equipped with weapons, in reality, their main weapon system is their aircraft, H-60 helicopters or Fire Scout drones. Up-armed LCSs may prove useful in some missions.


Fleet ballistic missile submarines (14) and Patrol Craft (13) have special roles. The SSBNs are strategic assets which play a role in nuclear deterrence. The PCs are valuable littoral assets, suitable for operations in the near shore areas a - surprise - patrol ships. The DDG-1000 series is another set of tech experiments, which have created ships looking for a mission.

The real meat of the combat power of the Navy, however, lies in the aircraft aboard its carriers (to include Marine F-35s embarked on certain amphibs - though they are mostly for close air support of landing forces, they can perform some combat air patrol missions), and in its cruisers, destroyers, and attack submarines.

Of these forces, the Navy has 22 cruisers and 67 destroyers. More destroyers are being built, but the cruiser force is aging with the newest one commissioned in 1994 - 26 years ago. Ship lives can be extended, but ... the Navy keeps trying to decommission some of them, as set out in this 2019 piece, here:


The U.S. Navy is considering canceling six planned service-life extensions on its oldest cruisers, meaning the service will be short six of its current 22 largest surface combatants by 2022, according to defense officials who spoke to Defense News on background.

The plan, as it will be proposed to Congress, is to decommission the cruisers Bunker Hill, Mobile Bay, Antietam, Leyte Gulf, San Jacinto and Lake Champlain in 2021 and 2022, foregoing plans for service-life extensions that have previously seen support in Congress.

All the ships will be at or near the end of their 35-year service lives when they are decommissioned, but the Navy has yet to decide on a replacement for the cruisers, which are the largest combatants in the fleet with 122 vertical launch systems cells. This comes at a time when the Navy needs as many missiles downrange as it can field as it squares off with the threat of Chinese and Russian anti-ship missiles.

Cruisers have 26 more vertical launch system, or VLS, cells per hull than their Arleigh Burke Flight IIA destroyer counterparts, and 32 more than the Flight I Burkes.

But the cruisers, which act as the lead air defense ship in a carrier strike group, have been notoriously difficult to maintain. The fleet has managed everything from cracking hulls to aging pipes and mechanical systems. The ships’ SPY-1 radars have also been difficult to maintain, as components age and need constant attention from technicians.


According to the Navy's 2020 30-year shipbuilding plan, the cruisers will not be replaced with new cruisers (except as "large surface combatants"), right now meaning more Burke class destroyers (Flight III) (which might be cruisers in all but name) and a new class of frigates (FFX). The goal is 104 +/- "major surface combatants and 50 some odd "minor surface combatants" (which includes frigates) It also includes 50 +/- attack submarines, and and a force of "cruise missile submarines" or "SSGN/Large Payload" submarines.  There also remain the likelihood that the future force will include numbers of unmanned vessels of various types. These ships are cheaper to build and operate since they don't need crew spaces or food storage spaces and crews cost a great deal of money.
Here's the March 2019 plan:

All of which assumes that the Navy gets the funding for a 355- ship force as mandated by law.

Okay, that's the background from which informed conversations about the needs and size of the Navy can be had. Many of us assert that 355 still is too small and that more surface combatants are needed to fulfill some of the missions that the Navy is tasked with, such as ocean escort duties in the face of a submarines threat to sea lines of communication to protect sustainment and follow-on forces. While some of those duties may be taken up by allied naval forces, with the major exceptions of Japan, South Korea, and Singapore, many allies have not grown their naval forces since they decided to cash in on the "peace dividend" that followed the end of the Cold War. More on that topic in another post. 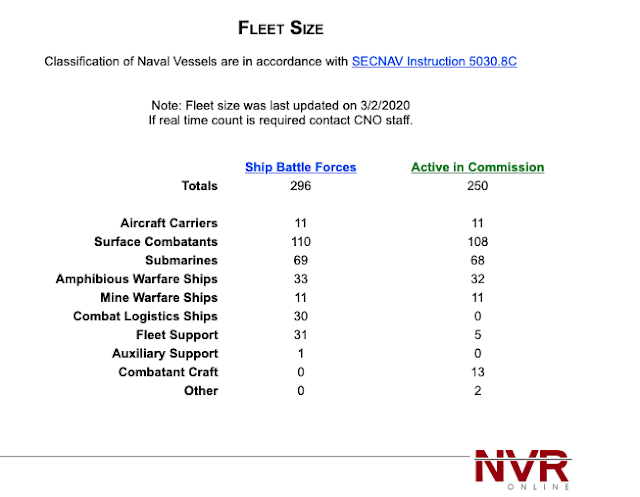