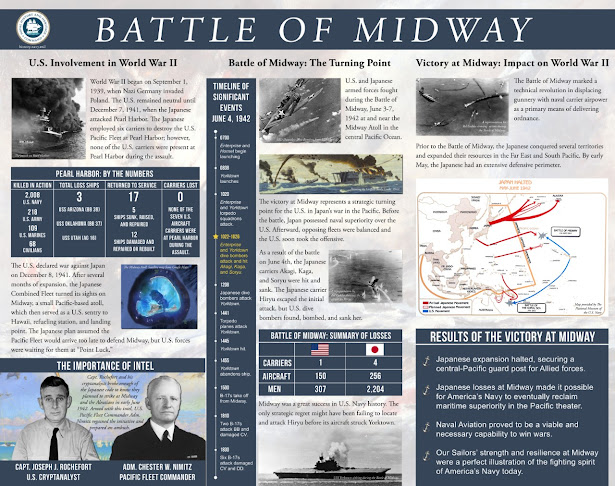 On 3 June, in the preliminary moves of the Battle of Midway, American land-based aircraft from Midway located and attacked Japanese transports about 600 miles west of Midway Island. U.S. Army Air Forces Boeing B-17 Flying Fortresses inflicted no damage, however, and four Consolidated PBY Catalina patrol bombers were sent out from Midway for a night attack on the approaching landing forces. As part of the overall Japanese plan, planes from light carriers Ryujo and Junyo bombed Dutch Harbor.

Just after midnight on 4 June, Admiral Nimitz, based on patrol plane reports, advised Task Forces 16 and 17 of the course and speed of the Japanese "main body," also noting their distance of 574 miles from Midway. Shortly after dawn, a patrol plane spotted two Japanese carriers and their escorts, reporting "Many planes heading Midway from 320 degrees distant 150 miles!"

The first engagement on 4 June, however, took place when the four night-flying PBYs attacked the Japanese transports northwest of Midway, with one PBY torpedoing a fleet tanker. Later that morning, at roughly 0630, Japanese carrier aircraft bombed Midway installations. Although defending U.S. Marine Corps fighters suffered disastrous losses, the Japanese only inflicted slight damage to the island’s facilities on Midway.

Over the next two hours, Japanese fighter aircraft on combat air patrol (CAP) and antiaircraft fire from the Japanese fleet annihilated the repeated attacks by Midway-based Marine Corps scout bombers and Navy torpedo bombers. Army Air Forces heavy bombers and torpedo-carrying medium bombers likewise bombed the Japanese carrier force without success, although without losses to themselves.

Between 0930 and 1030, Douglas TBD Devastator torpedo bombers from the three American carriers attacked the Japanese carriers. Although nearly wiped out by the defending Japanese fighters and antiaircraft fire, they drew off enemy aircraft, leaving the skies open for dive bombers from Enterprise and Yorktown. Douglas SBD Dauntlesses from Enterprise bombed and fatally damaged carriers Kaga and Akagi, while SBDs from Yorktown bombed and wrecked carrier Soryu.