When is a drought a national security issue? When it's severe enough to threaten national security, especially transportation, crop production, cities and towns, and regional military training and safety. 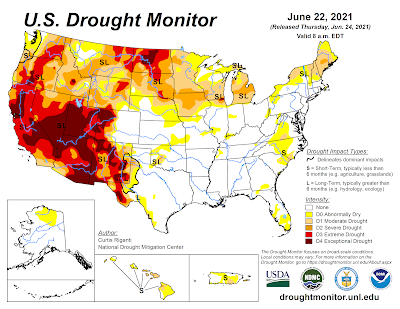 The U.S. Drought Monitor is jointly produced by the National Drought Mitigation Center at the University of Nebraska-Lincoln, the United States Department of Agriculture, and the National Oceanic and Atmospheric Administration. Map courtesy of NDMC.

Another interesting look from NASA at the levels of water "stored" in soil here:

The map below shows surface soil moisture as of March 29, 2021, as measured by the Gravity Recovery and Climate Experiment Follow-On (GRACE-FO) satellites. The colors depict the wetness percentile; that is, how the levels of soil moisture compare to long-term records for the month. Blue areas have more abundant water than usual, and orange and red areas have less. The darkest reds represent dry conditions that should occur only 2 percent of the time (about once every 50 years). 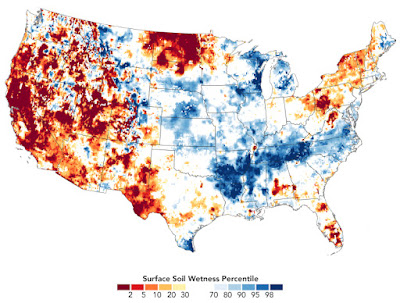 The map below shows shallow groundwater storage as of March 29, 2021, as measured by the GRACE-FO satellites. The colors depict how the amount of groundwater compares to long-term records (1948-2010). Groundwater in aquifers is an important resource for crop irrigation and drinking water, and it also can sustain streams during dry periods. Groundwater takes months to rebound from drought, though, as it has to be slowly and steadily replenished by surface moisture that seeps down through soil and rock to the water table. 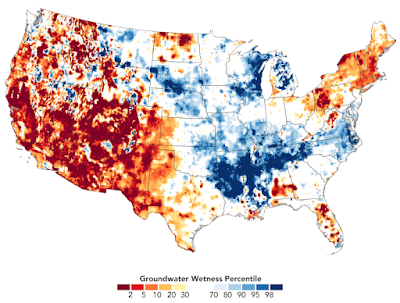 The U.S. Department of Agriculture reports on California water supply issues with the last report being from May 2021 (pdf):

As California enters the dry months of summer, this water year is on track to be one of the driest on record- due in no small measure to the lack of landfalling atmospheric rivers and persistent ridging/blocking over the Northeast Pacific Ocean (drought.gov). Statewide snowpack peaked on March 23rd with 64 percent its daily average, then shriveled to 17 percent of its daily average by the end of April, and to 7 percent by May 12th. Seasonal (October-April) precipitation totals were less than 50 percent of average in all three regions. Early May has been extremely dry, further reducing the seasonal average. California’s major reservoirs (excluding Lake Mead and Lake Powell) are collectively storing almost 8.5 million acre-feet less than they were this time last year. **** RESERVOIRS Total storage in California’s major reservoirs (excluding Lake Powell and Lake Mead) was 73 percent of average on April 30th, compared to 101 percent this time last year. Storage in Shasta Dam was 59 percent of average at the end of the month, roughly 1.4 million acre-feet less than this time last year. Storage in Lake Mead continues to decline, with reservoir levels approaching the 1,075-foot elevation that would trigger a Level 1 Water Shortage Declaration for the Lower Colorado River Basin.

As near as I can determine, that "Level 1 Water Shortage Declaration" comes from Interim Guidelines for the Operation of Lake Powell and Lake Mead 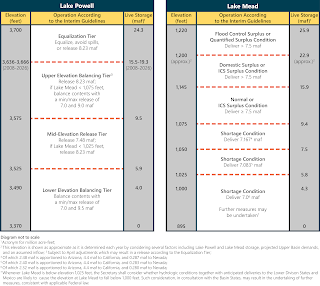 A "maf" is a Million Acre Feet"

One acre-foot equals about 326,000 gallons, or enough water to cover an acre of land, about the size of a football field, one foot deep.

If this drought continues in the west, where will the water come from to provide water to the large cities and farmland of the region? What will a shortage do to food costs? What step should be taken to to prevent a catastrooic failure of water supply?

Orange County, California, has a program that is helping as set out here:

This project is the world's largest wastewater purification system for indirect potable reuse. The Groundwater Replenishment System (GWRS) takes highly treated wastewater that would have previously been discharged into the Pacific Ocean and purifies it using a three-step advanced treatment process consisting of microfiltration, reverse osmosis and ultraviolet light with hydrogen peroxide. The process produces high-quality water that exceeds all state and federal drinking water standards. Operational since January 2008, this state-of-the-art water purification project can produce up to 70 million gallons (265,000 cubic meters) of high-quality water every day. This is enough water to meet the needs of nearly 600,000 residents in north and central Orange County, California.

Other entities in California are turning to desalination Desalination Is Booming as Cities Run out of Water :

Each day 100 million gallons of seawater are pushed through semi-permeable membranes to create 50 million gallons of water that is piped to municipal users. Carlsbad, which became fully operational in 2015, creates about 10 percent of the fresh water the 3.1 million people in the region use, at about twice the cost of the other main source of water.

Expensive, yes, but vital for the fact that it is local and reliable. “Drought is a recurring condition here in California,” said Jeremy Crutchfield, water resources manager at the San Diego County Water Authority. “We just came out of a five-year drought in 2017. The plant has reduced our reliance on imported supplies, which is challenging at times here in California. So it’s a component for reliability.”

A second plant, similar to Carlsbad, is being built in Huntington, California with the same 50-million-gallon-a-day capability. Currently there are 11 desalination plants in California, and 10 more are proposed.

Not everyone is thrilled with desalination, pointing out that it requires great amounts of energy, as set out here and here. It should be noted that the "anti-desal" pieces are older than the startup of the San Diego Carlsbad plant.

Be that as it may, it's not like California's existing power issues are not well known, as set out California tells public to prepare for heatwave; power prices soar:

The group responsible for North American electric reliability has already warned that California is the U.S. region most at risk of power shortages this summer because the state increasingly relies on intermittent energy sources like wind and solar, and as climate change causes more extreme heat events, drought and wildfires across the U.S. West.

It would seem California needs to rethink many issues, including nuclear power to help power a system that will help it survive droughts.

And it's not like the rest of the West and the farm belt aren't facing similar issues.