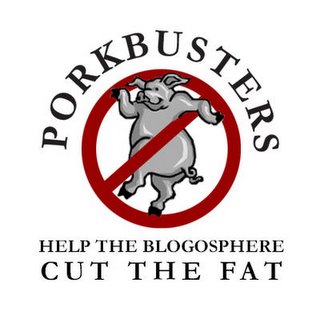 Back in September, I suggested that the Regional Light Rail System being developed for the Raleigh-Durham area was a waste of money and a candidate for Porkbusting. The project was added to the Porkbuster pages. Letters were written to Senators and Congressmen. The Senators (both Republicans) responded with letters indicating their support for the project. However, as reported on February 6, 2006, here:

On Monday, the federal government gave the TTA proposal a low rating and announced that no money for the Triangle Rail is in the president's budget.
Despite the news from Washington, D.C., the local commuter effort will continue because of the need. The TTA says federal funding is not the only means in which the rail system could be built.

I have held off announcing success in the battle agains this expensive project because well, these things never really seem to die as well-said here at Talking about Politics:

Ronald Reagan used to say the closest thing to eternal life on earth was a government program. I’m beginning to think the Triangle Transit Authority is may prove his point.
The News and Observer reports that yesterday Senators Elizabeth Dole and Richard Burr wrote the TTA that the Federal Transportation Administration had “thoroughly examined” the TTA’s light-rail project and “the initiative does not meet the current required standards, nor the former standards.” The bottom line: TTA will not be eligible for federal funding. The Senators added, “the rail project is likely not an option for the region; we therefore believe it is time for TTA to explore other possibilities.”
Amen.
Did that please the TTA?
Not one bit. It rolled-out old warhorse (and now TTA’s legal counsel) Wib Gulley for a late-night news conference to respond. Gulley said: Not so.
According to Gulley the TTA has discovered it left 132,000 commuters out of it’s computer model – and the new model will give a better chance of getting its hands on federal money. The problem is we’ve heard that before. It’s almost become TTA’s standard response to a no – we have to redo the computer model.
The TTA has been going on for ten years and its proposal has grown from $100 to $800 million. It is a bureaucracy fighting for the government equivalent of eternal life – so that whatever happens it can keep on keeping on at taxpayers’ expense. And it’s got politicians like Raleigh Major Charles Meeker – who is apparently heart-set on light-rail whether it’s needed, justified, and no matter what it costs – helping them.
These folks have been burning through taxpayers’ money for ten years and it’s time they stopped. Senator Dole and Senator Burr gave the TTA some good advice: Move on.
When the federal government – which normally has never seen a pork-barrel project it doesn’t like – says your project is a waste of money, it’s time to give up.

Note that the final (?) knife in the project was its omission from the Federal Budget offered up in February, while the Talking about Politics piece appeared in December. Maybe a sign of how dead this project is lies in the headline of this report: "Raleigh Councilman Wants To Redirect Regional Rail Project Funds" and the Councilman's comments:

To date, the Triangle Transit Authority has spent more than $140 million on the Triangle Regional Rail Transit System, which would provide a commuter rail line between Raleigh and Durham.
But with funding resistance from the federal government, Raleigh City Council Member Philip Isley wants the city's share of the money back.
"I don't think anybody who has looked at this objectively would disagree the federal government has done pretty much everything possible to make sure this does not occur," Isley said. "We've got a pot of money out there that's not being utilized. My hope would be that we could take a look at it."
About $7 million a year from a rental car tax goes toward the Regional Rail project.

Isley wants the City Council to lobby the Legislature to let Raleigh and Wake County use the tax money for road and school needs.

"Funding resistance from the federal government" - what a funny way to phrase a denial of the money because no one can cook the books enough to show that the rail system will be anything but a money pit. In any event, there is one possible spark of life left in the federal funding path and a plea for local taxpayers to foot the bill in this line:

The TTA will know by Sept. 30 if the project is permanently derailed from federal support. Even if it's not, Worthy says the project could continue with local funding.

It may never die.