The Royal Navy (and its sisters and cousins and aunts) has some amphibious capability, as set out by Think Defence in UK Amphibious Capability - Today and Tomorrow : 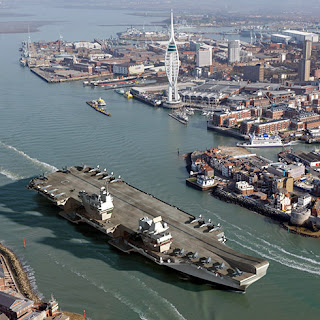 The UK maintains a fairly broad array of amphibious combat capabilities with contributions from the Royal Navy, Royal Fleet Auxiliary, the British Army and a number of civilian providers.

In many ways, the future looks bright; improvements to naval gunfire, new support helicopters and attack helicopters on the horizon, and of course, the carriers and F-35B capability, joined by development in unmanned systems, all point to a strong future.

But with the impending ‘out of service’ date of HMS Ocean, block out of service of the amphibious shipping in the medium term, a changing threat and political landscape, and the constant pressure on budget, there are many difficult issues that remain to be resolved.

One issue is size. The RN is under-sized and under-funded.

More good reading at the Royal Navy website where "sea blindness" is being fought daily:


Maritime trade is the lifeblood of the UK economy and industry. 95% of Britain’s economic activity depends on the oceans. And every year Britain imports goods worth £524 billion.

The UK is so dependent on the seas for its prosperity, that without the Royal Navy acting as a deterrent the effect on the economy would be overwhelming.