"Payloads, not platforms" so sayeth a former CNO.

So, how to get a whole lotta fire power in to a single ship? About 20 years ago there were proposals for the minimally crewed, missile laden Arsenal Ship, designed to deliver a flexible package of ordnance downrange for support of, say, amphibious operations or something: 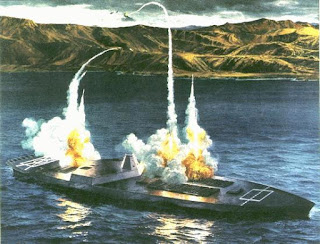 The Arsenal Ship was developed initially as a demonstration program to provide a large increase in the amount of ordnance available to ground- and sea-based forces in a conflict, particularly during the early days. The Navy envisioned that the ship would have a large capacity of different missiles, including Tomahawk and Standard, and space for future extended range gun systems. The ship could also have a sea-based version of the Army Tactical Missile System. This ship could greatly increase capabilities in littoral operations to conduct long-range strike missions, provide fire support for ground forces, defend against theater ballistic missiles, and maintain air superiority.
The Arsenal Ship has the potential to provide substantial fire support to a variety of missions in regional conflicts without the logistics burden of transporting both delivery systems and ammunition to the shore and forward areas. The Arsenal Ship is expected to carry a large number of VLS cells but without the sophisticated command and control and radar equipment found on Aegis-equipped ships.

The number of VLS cells being bandied about was 500 per ship, with 4 or 5 ships contemplated.

More recently, the concept has been revived in the SSGN submarine conversions:


The SSGN Program Office refueled and converted four SSBNs into SSGNs in a little more than five years at a significantly lower cost and less time than building a new platform. USS Ohio (SSGN 726) entered the shipyard on Nov. 15, 2002, completed conversion in December 2005 and deployed for the first time in October 2007. USS Florida (SSGN 728) commenced its refueling and conversion in August 2003 and returned to the fleet in April 2006. USS Michigan (SSGN 727) started its shipyard availability in October 2004 and delivered in November 2006. USS Georgia (SSGN 729) completed conversion in December 2007.
***
Combined, the four SSGNs represent more than half of the Submarine Force's vertical launch payload capacity with each SSGN capable of carrying up to 154 Tomahawk land-attack cruise missiles. The missiles are loaded in seven-shot Multiple-All-Up-Round Canisters (MACs) in up to 22 missile tubes. These missile tubes can also accommodate additional stowage canisters for SOF equipment, food, and other consumables to extend the submarines' ability to remain forward deployed in support of combatant commanders' tasking. The missile tubes are also able to accommodate future payloads such as new types of missiles, unmanned aerial vehicles, and unmanned undersea vehicles.

Well, heck, there has been discussion of using the LPD 17 hull to develop a "Ballistic Missile Defense Ship" with up to 288 VLS cells:


Atop the superstructure is a massive S-band phased array radar, over 21 feet on each side. Compare that to the 12.5 ft. diameter of the SPY-1 radars aboard Ticonderoga Class Cruisers and Arleigh Burke Class Destroyers. For radars, larger size means greater range and better resolution and these arrays have three times the area of those which equip current BMD vessels.

Starting behind the superstructure and continuing along the periphery to the stern is a vertical launch system (VLS) with 288 cells to carry surface to air missiles (SAMs), Tomahawk cruise missiles or Vertical-launch Anti-submarine rockets (VLAs). For comparison, Ticos have 122; later Burkes 96 and earlier Burkes 90. So, that’s triple the average missile load to start, with plenty of room to install more. Plus, the ship is taller than the surface combatants, which means it can hold future missiles of greater length and range.

Why? Some suggest it would help defeat anti-access systems, as Capt. Tangredi did in Breaking the Anti-Access Wall:


Before describing the specifics of an arsenal ship, it is important to describe what it is not—or rather, what it should not be. It is not a multipurpose ship; therefore, it is not a replacement for any other ship, especially not aircraft carriers. It is not a destroyer or cruiser capable of conducting missions in multiple domains (that is, antiair, antisurface, antisubmarine, and anti–ballistic-missile warfare). Its weapons are for strike from the sea, not for war at sea . It is not a ship for all reasons. It is a gap filler that will give us the anti-anti-access capability that we need but do not have in the necessary quantity.

A modern arsenal ship should not be designed to make port visits, provide humanitarian assistance, provide C2, host any sort of staff, or do anything else other than fulfill the third capability required to defeat anti-access strategies: provide maximum volume of precise fire onto enemy targets. The C2 of its ordnance should come from other warships. Its long-range and mid-range defenses would be provided by the rest of the Fleet or other joint assets. It should not be expected to operate independently, although a low maximum speed and unique sea-keeping characteristics might require independent transits and tactical rendezvous with deception techniques minimizing the risks.

Perhaps we should call it a self-propelled arsenal barge.

SNAFU has this image of a towed missile barge, the source of which is hard to track, but the caption on the picture indicates this is Russian design using a Sovremennyy-class destroyer as a towing ship 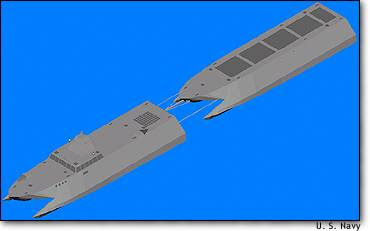 Even Lego modelers seem to be on the arsenal ship band wagon with a fantasy build: 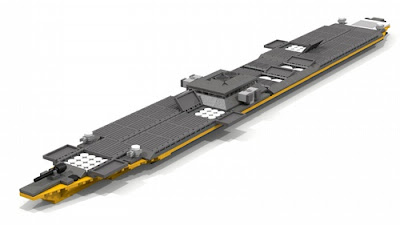 If you've got any info on the Russian design or the JSHV barge, please let me know.

In the meantime, there is this 2005 article by Cmdr. John B. Perkins from the Armed Forces Journal, "Surface ship, submarine missions are coalescing" to ponder:


Andrew F. Krepinevich, director of the U.S. Center for Strategic and Budgetary Assessments (CSBA), alluded to this trend 10 years ago.


The Navy must become bold in decision-making before it is relegated to playing catch-up in a world fast becoming shaped by quick-striking revolutions in military affairs.

Well, we've got the SSGNs.

UPDATE: About that LPD based missile platform: