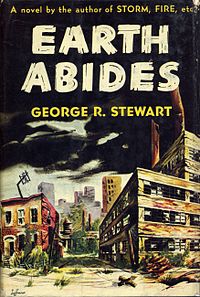 Earth Abides is a 1949 post-apocalyptic science fiction novel by American writer George R. Stewart. It tells the story of the fall of civilization from deadly disease and its rebirth. The story was set in the United States in the 1940s in Berkeley, California and told by a character, Isherwood Williams, who emerges from isolation in the mountains to find almost everyone dead.

Earth Abides won the inaugural International Fantasy Award in 1951. It was included in Locus Magazine's list of best All Time Science Fiction in 1987 and 1998 and was a nominee to be entered into the Prometheus Hall of Fame. In November 1950, it was adapted for the CBS radio program Escape as a two-part drama starring John Dehner.

Here are those shows -