Please join us at 5pm EDT on 8 July 2018 for Midrats Episode 445: How Small Ships Can Make a Big Navy Better

Building off our discussions from last week's Midrats, our guest this  will be Lieutenant Joshua M. Roaf, USN to discuss part of the solution to improving the professional performance of our Surface Warfare Officers in what should be the core of their skillset; seamanship.
Using many of the issues he raised in a recent article co-authored with LT Adam Biggs, USN, Bring Back the Patrol Craft, we will explore the various advantages of returning balance to the fleet with an expansion of truly small surface combatants.

A native of Bennington, Vermont, LT Roaf graduated from Ithaca College, Ithaca NY in 2010 with a bachelor’s degree in Biochemistry and earned his commission from Officer Candidate School in 2010. 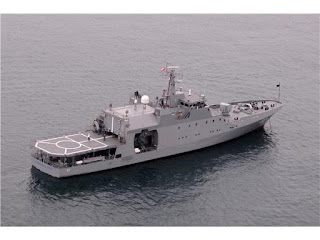 Afloat, Lieutenant Roaf completed his division officer tours aboard USS REUBEN JAMES (FFG57) where he served as the Main Propulsion Officer and Electrical Officer and then aboard USS ANZIO (CG-68) as the Navigator and Executive Department Head. During his sea tours, he participated in numerous Multi-National exercises (RIMPAC 2011/12, CANADIAN TGEX, BOLD ALLIGATOR, JOINT WARRIOR) and completed two Western Pacific deployments.

He is currently stationed at Surface Warfare Officer School in Newport RI, training to become a Department Head afloat.