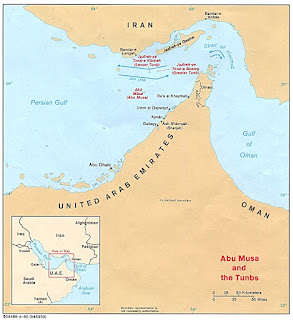 neighboring countries if Washington presses ahead with its goal of forcing all countries to stop buying Iranian oil.
***
Iranian officials in the past have threatened to block the Strait of Hormuz, a major oil shipping route, in retaliation for any hostile U.S. action against Iran.

“The Americans have claimed they want to completely stop Iran’s oil exports. They don’t understand the meaning of this statement, because it has no meaning for Iranian oil not to be exported, while the region’s oil is exported,” the website, president.ir, quoted him as saying.

Let's see now, major oil producers who might benefit if Iran cuts off its nose to spite its face include Russia, Saudi Arabia, Canada, the U.S. - I would add Venezuela, but its oil production capabilities are in shambles. The U.S is now the world's leading producer, thanks to fracking, so Iran's threats are less meaningful than they were once upon a time.

Oh, yes, there is also this U.S. Navy says will protect commerce in face of Iran oil threat:


The U.S. Navy stands ready to ensure free navigation and the flow of commerce, the U.S. military’s Central Command said on Thursday, as Iran’s Revolutionary Guards warned they would block oil shipments through the Strait of Hormuz if necessary.
***
If Iran cannot sell its oil under U.S. pressure, then no other regional country will be allowed to either, said Mohammad Ali Jafari, who commands the Islamic Revolutionary Guard Corps, Iran’s most powerful military force.

“We are hopeful that this plan expressed by our president will be implemented if needed ... We will make the enemy understand that either all can use the Strait of Hormuz or no one,” Jafari was quoted as saying by Tasnim news agency. 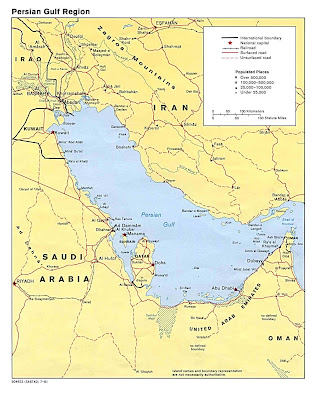 The Strait of Hormuz is the most important oil transit channel in the world with about one-fifth of global oil consumption passing through each day.

“The U.S. and its partners provide, and promote security and stability in the region,” Central Command spokesman Navy Captain Bill Urban said in an email to Reuters.

Asked what would be the U.S. Naval Forces’ reaction if Iran blocks the strait, he said: “Together, we stand ready to ensure the freedom of navigation and the free flow of commerce wherever international law allows.”

The Guards’ naval arm lacks a strong conventional fleet. However, it has many speed boats and portable anti-ship missile launchers, and can lay


A senior U.S. military leader said in 2012 the Guards have the ability to block the strait “for a period of time” but the United States would take action to reopen it in such an event.

Well, that's why we have a Navy. And an Air Force.

I would think clearing the air space above the Arabian Gulf would be priority one, followed by using air power to smite the "many speed boats and portable anti-ship missile launchers" probably while they sortie to lay mines or line up for swarm attacks. Air power including Navy and AF assets, of course, along with allies in the area who would probably not look kindly on Iran attempts to cut off the oil flow through the Strait or movement in the Gulf.

One might ask the question, "How much of a IRGC swarm can an AC-130 chop up if an Ac-130J was called upon to sweep the sea of IRGC swarms?" Unlike a similar question about woodchucks, I think the answer to this one would be "lots and lots."

Iran's leadership is failing the people of Iran more than ever as they try to hang on to their perks and power. Being stupid in this situation would put them squarely on the back of an already very restless tiger.