Friday Film: Nautical Rules of the Road "The Halifax Incident" (1942)

Walt Disney Studios animated one of the worst maritime disasters of all time: 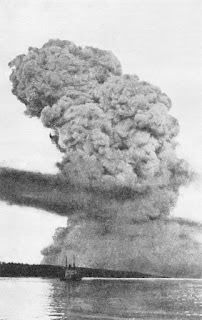 
At 9:04:35 am the out-of-control fire on board Mont-Blanc set off her highly explosive cargo.[57] The ship was completely blown apart and a powerful blast wave radiated away from the explosion at more than 1,000 metres (3,300 ft) per second. Temperatures of 5,000 °C (9,000 °F) and pressures of thousands of atmospheres accompanied the moment of detonation at the centre of the explosion.[58][25] White-hot shards of iron fell down upon Halifax and Dartmouth.[59] Mont-Blanc's forward 90-mm gun, its barrel melted away, landed approximately 5.6 kilometres (3.5 mi) north of the explosion site near Albro Lake in Dartmouth, and the shank of her anchor, weighing half a ton, landed 3.2 kilometres (2.0 mi) south at Armdale.[60]

A cloud of white smoke rose to over 3,600 metres (11,800 ft).[61] The shock wave from the blast travelled through the earth at nearly 23 times the speed of sound and was felt as far away as Cape Breton (207 kilometres or 129 miles) and Prince Edward Island (180 kilometres or 110 miles).[25][62] An area of over 160 hectares (400 acres) was completely destroyed by the explosion,[60] and the harbour floor was momentarily exposed by the volume of water that was displaced. A tsunami was formed by water surging in to fill the void;[63] it rose as high as 18 metres (60 ft) above the high-water mark on the Halifax side of the harbour.[64] Imo was carried onto the shore at Dartmouth by the tsunami.[65] The blast killed all but one on the whaler, everyone on the pinnace and 21 of the 26 men on Stella Maris; she ended up on the Dartmouth shore, severely damaged. The captain's son, First Mate Walter Brannen, who had been thrown into the hold by the blast, survived, as did four others.[66] All but one of the Mont-Blanc crew members survived.[67]

Over 1,600 people were killed instantly and 9,000 were injured, more than 300 of whom later died.[25] Every building within a 2.6-kilometre (1.6 mi) radius, over 12,000 in total, was destroyed or badly damaged.[63] Hundreds of people who had been watching the fire from their homes were blinded when the blast wave shattered the windows in front of them.[68] Stoves and lamps overturned by the force of the blast sparked fires throughout Halifax,[69] particularly in the North End, where entire city blocks were caught up in the inferno, trapping residents inside their houses. Firefighter Billy Wells, who was thrown away from the explosion and had his clothes torn from his body, described the devastation survivors faced: "The sight was awful, with people hanging out of windows dead. Some with their heads missing, and some thrown onto the overhead telegraph wires." He was the only member of the eight-man crew of the fire engine Patricia to survive.[70]