Gulf of Guinea Piracy: Nigeria Reaches Out to Japan for Help

Report that Nigeria's leader has asked Japan for assistance in fighting piracy and illegal fishing in the Gulf of Guinea here:


President Muhammadu Buhari on Thursday in Yokohama, Japan, sought the support of the Japanese government in combating piracy in the Gulf of Guinea as well as illegal fishing in that region.

The President made the request during a bilateral meeting between the Nigerian delegation and Japanese officials led by Prime Minister Shinzo Abe.

Might get interesting if Japan helps out fighting the far seas Chinese fishing criminals.

An oil rich country of over 200 million should be willing to spend money on an adequate Coast Guard or Navy to patrol its own waters, vital sea lanes, and to join in regional operations with its neighbors to cut down on local thuggery and the foreign fishing fleets that are troubling western Africa. To be fair, Nigeria has recently added to its fleet Nigerian Navy commissions new vessels
:


The Nigerian Navy has commissioned into service 16 new vessels, including ten small boats and six patrol vessels, which will be used to enhance maritime security and protect the country’s oil and gas assets. It has also revealed that more vessels are on the way.
***
The vessels included the NNS Ekulu and NNS Nguru, two FPB 110 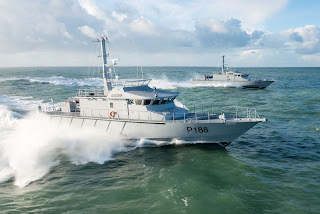 patrol boats delivered earlier this year by France’s Ocea. These 35 metre vessels were ordered in February 2017 and are to be equipped with two 12.7 mm and one 20 mm cannon each. Nigeria has also ordered five FPB 72s from Ocea, with the NNS Gongola and NNS Calabar delivered in January this year, after the NNS Shiroro and NNS Ose arrived in 2017. These four vessels were also commissioned on 3 September.

It is not clear what type of small boats were commissioned but it is likely they are 9.5 metre Guardian fast patrol boats built by Paramount Maritime. In November 2017 the Nigerian Navy accepted four of the type out of an order for 14 – the other ten, which are 8.5 metre long variants, were to be delivered progressively.

The Nigerian Navy has also taken delivery of a number of 8.2 metre long boats built by Nigerian company Epenal, with around 60 been delivered over the last year.

Whatever these additions, it needs more to allow it to be more assertive in protecting it home waters and its EEZ.

According to this, Nigeria's economy is about the same as the U.S. state of Ohio, which has only about 12 million residents. One problem is, of course, a certain level of corruption which diverts public monies into private hands. According to Transparency International, though, Nigeria is only the 144th most corrupt country out of 180 countries, which means it could be worse, I suppose.
It's not like the corruption in resource rich Russia or Venezuela, is it? If you are wondering, Somalia is #1 in corruption (180 out of 180). 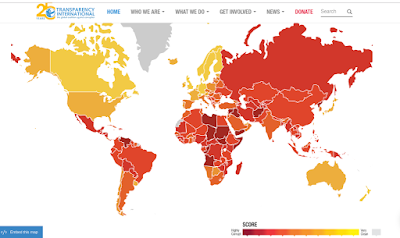