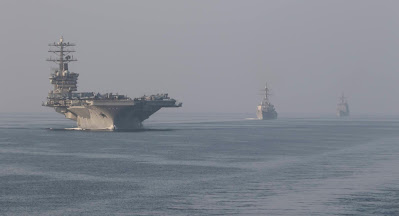 Fewer carriers are deploying more even as repeated warning lights have been going off that we are expending in peace what we will need in war when it comes to personnel and materiel in carrier aviation.

Using her article, No Margin Left: Overworked Carrier Force Struggles to Maintain Deployments After Decades of Overuse, as a starting point and diving it to some of the additional insights she gained while writing it, Megan Eckstein from USNINews will be joining us along with Sam LaGrone.

Megan Eckstein is the deputy editor for USNI News. She previously covered Congress and the Pentagon for Defense Daily, and the surface navy and amphibious operations as an associate editor for Inside the Navy. She began her career covering the military at the Frederick (Md.) News-Post, where she wrote about personnel and family issues, military medical research, local reserve and National Guard units and more. Eckstein is a 2009 graduate of University of Maryland College Park.

Sam LaGrone is the editor of USNI News. He has covered legislation, acquisition and operations for the Sea Services since 2009 and spent time underway with the U.S. Navy, U.S. Marine Corps and the Canadian Navy.