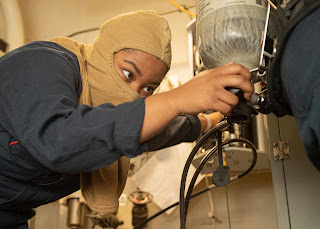 To those leaders making these decisions, or who are unaware of them but could influence them, I would ask, “Would you feel safe boarding a civilian airline whose maintenance department was routinely and chronically undermanned this way?” and “Would you feel comfortable letting your family?” Even though leaders and budgeters save costs in the MPN account, there are personal costs that result from reductions in their sailor’s sleep, fitness, personal time, or cognitive performance. Manning shortfalls contribute to crew fatigue and reduced crew endurance, increasing the chance of mistakes and increasing their risk tolerance to a point of ethical dilemma and decisions to cut corners with maintenance and other administrative requirements to self-manage the workload.

This is a "read the whole thing piece." Master Chief Kingsbury points out the issues caused by the efforts to save personnel dollars -

Giving the fleet billets is one thing, but in a highly technical environment requiring specialized people, giving them the right billets with the knowledge, skills, and abilities to meet the job requirement is another. And, the sailor working 80 hours suffers the same effects regardless of where their unit is in the OFRP. Once any ship falls to a certain level of fit, they could be displayed as yellow or red to more accurately reflect the level of risk, so force manning managers could decide where to accept risk. To this end, leverage the new type commander human factors engineers, fleet safety officers, and naval safety center to analyze and articulate the risk to mission and force. Then, communicate to OPNAV N1 in terms of operational risk and challenge them to take actions to mitigate it, such as increasing recruiting goals, retention incentives, or adjusting distribution policies.

From the Navy's Core Values Charter

“COMMITMENT” The day-to-day duty of every man and woman in the Department of the Navy is to join together as a team to improve the quality of our work, our people and ourselves. I will:

The "well-being" of our people ought to be the driving factor in ship manning. This has to include that the right people are put in the right positions with the right training and tools to do their jobs so that any ship - all ships- go to sea with the confidence that the men and women who serve therein are ready to take on the heavy burdens going to sea and, potentially, into harm's way involve.

Admiral Nimitz said, "Leadership consists of picking good men and helping them do their best." When we put our men and women into a fleet where they are hamstrung by manning shortfalls, we are not exercising good leadership.