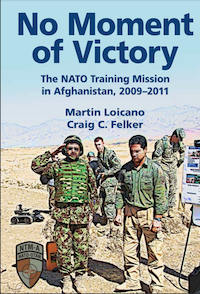 In what history will show was a failed effort, for almost two decades, the most advanced military and police forces in the West tried to build a security force for the people of Afghanistan, an effort that took off with great urgency towards the end of the first decade of the conflict. A cornerstone of that effort was NATO Training Mission–Afghanistan (NTM-A).

Our guests to discuss this effort and what lessons it holds for the future will be Dr. Martin Loicano and Dr. Craig C. “C. C.” Felker. Using extensive research and two combined years in Afghanistan, they've documented the 2009-2010 effort in their book, No Moment of Victory: the NATO Training Mission in Afghanistan from 2009-2011.

Dr. Loicano served as chief historian, North Atlantic Treaty Organization (NATO), Supreme Headquarters Allied Powers Europe (SHAPE). In that capacity, he advised the SHAPE commander and also was part of the SHAPE Strategic Planning Group. Previously, he was an associate professor in the Department of Strategy at the Air War College (AWC). Prior to joining the AWC faculty, Dr. Loicano served with the NATO Training Mission–Afghanistan from 2010 to 2012. He holds a PhD in history from Cornell University, specializing in Cold War conflicts, Southeast Asia, and China.

Dr. Felker is a retired Navy captain and author of Testing American Sea Power: U.S. Navy Strategic Exercises, 1923–1940. He received his PhD from Duke University in 2004 and afterward served as a permanent military professor in the History Department of the United States Naval Academy, chairing the department from 2014 to 2016. He is currently the executive director of the Society for Military History.