Interesting bit of U.S. Naval past from James Fenimore Cooper's History of the Navy of the United States of America (1853): 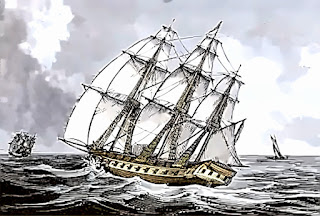 The year 1779 opens with the departure of the Alliance, 32, for France. It has already been stated that the command of this ship had been given to a Captain Landais, who was said to be a French officer of gallantry and merit. Unfortunately the prejudices of the seamen did not answer to the complaisance of the Marine Committee in this respect, and it was found difficult to obtain a crew willing to enlist under a French captain. When General Lafayette reached Boston near the close of 1778, in order to embark in the Alliance, it was found that the frigate was not yet manned. Desirous of rendering themselves useful to their illustrious guest, the government of Massachusetts offered to complete the ship's complement by impressment, an expedient that had been adopted on more than one occasion during the war ; but the just-minded and benevolent Lafayette would not consent to the measure. Anxious to sail, however, for he was entrusted with important interests, recourse was had to a plan to man the ship, which, if less objectionable on the score of principle, was scarcely less so in every other point of view.

The Somerset 64, had been wrecked on the coast of New England, and part of her crew had found their way to Boston. By accepting the proffered services of these men, those of some volunteers from among the prisoners, and those of a few French seamen that were also found in Boston after the departure of their fleet, a motley number was raised in sufficient time to enable the ship to sail on the 11th of January. With this incomplete and mixed crew, Lafayette trusted himself on the ocean, and the result was near justifying the worst forebodings that so ill-advised a measure could have suggested.

After a tempestuous passage, the Alliance got within two days' run of the English coast, when her officers and passengers, of the latter of whom there were many besides General Lafayette and his suite, received the startling information that a conspiracy existed among the English portion of the crew, some seventy or eighty men in all, to kill the officers, seize the vessel, and carry the frigate into England. With a view to encourage such acts of mutiny, the British Parliament had passed a law to reward all those crews that should run away with American ships ; and this temptation was too strong for men whose service, however voluntary it might be in appearances, was probably reluctant, and which had been compelled by circumstances, if not by direct coercion.

The plot, however, was betrayed, and by the spirited conduct of the officers and passengers, the ringleaders were arrested.

On reaching Brest, the mutineers were placed in a French gaol, and after some delay, were exchanged as prisoners of war, without any other punishment; the noble-minded Lafayette, in particular, feeling averse to treating foreigners as it would have been a duty to treat natives under similar circumstances.