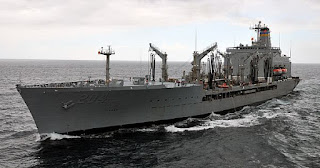 An embarked security team aboard a U.S. Navy vessel fired upon a small motor vessel after it disregarded warnings and rapidly approached the U.S. ship near Jebel Ali, United Arab Emirates today.

In accordance with Navy force protection procedures, the sailors on the USNS Rappahannock (T-AO 204) used a series of non-lethal, preplanned responses to warn the vessel before resorting to lethal force.

The U.S. crew repeatedly attempted to warn the vessel's operators to turn away from their deliberate approach. When those efforts failed to deter the approaching vessel, the security team on the Rappahannock fired rounds from a .50-caliber machine gun.

The incident is under investigation.


A US navy vessel has fired on an approaching motor boat off the coast of the United Arab Emirates, killing one person and injuring three others, reports said.

Lieutenant Greg Raelson, a spokesman for the navy's Bahrain-based 5th Fleet, said on Monday that sailors aboard the USNS Rappahannock opened fire on the boat after it ignored warnings.

"US ships have an inherent right to self defense against potential threats... The safety of our vessels and our personnel is of the utmost priority," he told Al Jazeera in an email response to a query.

A US consular official in Dubai confirmed the incident, telling the Associated Press that one person was killed and three others injured.

***
Dozens of police and other Emirati officials crowded around the boat after it docked after the incident in a small Dubai port used by fishermen and sailors. The boat was removed from the port shortly afterward.

Rescue workers were seen carrying one person in a body bag off the white-hulled boat and placing it in an ambulance as fishermen looked on, AP reported.

The boat appeared to be a civilian vessel about 9 meters long and powered by three outboard motors.

Similar boats are used for fishing in the region, though Iran's Revolutionary Guard also employs relatively small, fast-moving craft in the Gulf.

UPDATE2: A timeline from the U.S. Navy: 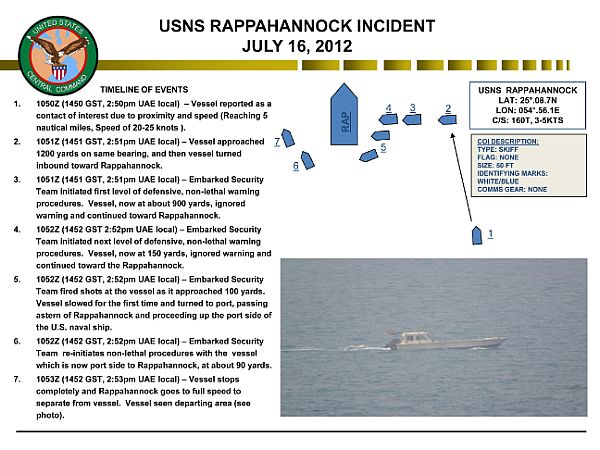