Sometimes even a blind hog finds an acorn, and, as set out in "Iran accuses Gulf States of supporting Somali piracy" from the Daily News Egypt, even Iran gets something partially right:


The state-run Fars News Agency quoted General Mohammad Nazzeri, of Iran’s navy as claiming, “the pirates of the Gulf of Aden are simple fishers but their sponsors and main leaders are Sheikhs of the United Arab Emirates, Yemen and Saudi Arabia. They provide the Somalis with money, weapons and equipment.”
***
While the three accused states might not have serious interests in combating piracy, they may host elements that collude with the Somali pirates, those familiar with Somali piracy said.

“’Supporting’ is probably too strong a word. Connections and involvement by citizens of those countries? Yes,” said Peter Eichstaedt, a journalist who has lived and worked in east Africa. “I spoke with pirates and former pirates, and others have documented this as well, who say that Dubai acts as a hub for much of the pirate financial activity. Ransom money is moved in and out of Dubai. Once pirates collect their ransom, fleets of Toyota Land Cruisers are purchased in Dubai, along with other sorts of high-demand items.”

Yemen, said Eichstaedt, may play a contributing role because of its proximity. He says said because of its location across the Gulf of Aden from Somalia, Yemen ends up hosting a lot of clandestine activity. Yemen is also facing acute degradation to its state institutions, which could further incentivise those who operate outside the law to use it as a base. 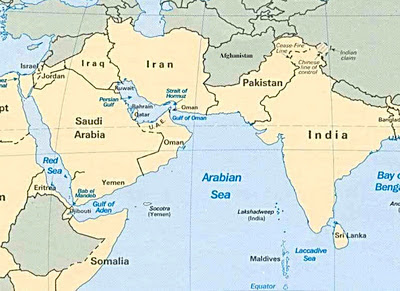 However, there seems to be no evidence that Yemen formally supports piracy. “Saudi connections are hard to pinpoint,” said Eichstaedt. “Saudi extremists may be supporting the Al Shabab fundamentalist fighters in southern Somalia. The Saudi connections could involve Somalia pirates used to transport weapons and personnel into and out of Somali to support the Al Shabab cause.

“The UAE has invested more than most in combating piracy,” said Bahadur.

Yes, it is a world full of shades of gray.

Under the broadest expansion of General Nazzeri's thought, Toyota "supports" piracy by building Land Cruisers and Yamaha supports them by building outboard motors.

And Iran supports them by producing oil.