America's Cup: To the Wire 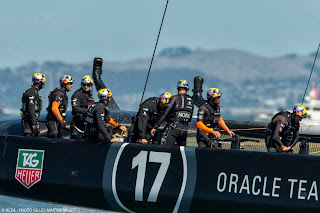 
After staging an improbable comeback from 7 points behind and with no margin for error, ORACLE TEAM USA has forced a winner-take-all race {25 September} for the 34th America’s Cup after sweeping both races {on 24 Sept}.

ORACLE TEAM USA won Race 17 by 27 seconds and Race 18 by 54 seconds and now stands even with Emirates Team New Zealand on the scoreboard with 8 points each. Only twice before in the 162-year history of the America’s Cup has there been a winner-take-all final race, in 1920 and 1983. In 1920 the defender won and in ’83 the challenger won.

If you like fast sailing boats in SF Bay, it doesn't get any better than this.