What are some ideas for preparing for such a catastrophe? In some past post in this series I suggested one route might be using steam to power a generator as in this post. There a a whole lot of issues with steam generation, though, as noted here:


After 3 years and more than 100K investment, I have come to the difficult realization that using steam power to generate electricity for home use is not currently viable. The wood fired boiler being the key problem. To get a real wood fired boiler that can do the job (produce the pounds of steam per hour) is expensive, no one is manufacturing certified boilers for home use, is dangerous (steam burns/ruptures), there is a massive regulatory process to get certified and requires regularly inspected (ASME), and lastly it is a very manual process. You have to be there the entire time it is operating. So if it takes 8 hours to charge your batteries – you are there putting wood into it for … 10 hours (1 hour to get up to temp and 1+ hour shut-down).

Also, here. The point being that steam boilers powered by wood are (a) very labor intensive and (b) dangerous. Your opinion may vary.

Another alternative for off-grid power generation that shows promise involves an engineering design from 1816 - the Stirling engine:


A Stirling engine is a heat engine that operates by cyclic compression and expansion of air or other gas (the working fluid) at different temperatures, such that there is a net conversion of heat energy to mechanical work.
***
Stirling engines can run directly on any available heat source, not just one produced by combustion, so they can run on heat from solar, geothermal, biological, nuclear sources or waste heat from industrial processes.

Unlike an internal combustion engine, the heat applied in a Stirling engine is external which is why there are so many "heat sources" available to drive it.

Dean Kamen, inventor, thinks Stirling engines are the wave of the future, as set out in this Forbes piece "Segway Inventor Dean Kamen Thinks His New Stirling Engine Will Get You Off The Grid For Under $10K":


Though Stirlings are highly efficient, they haven’t caught on because it takes them a while to warm up and they can’t change power output quickly. That makes them unworkable for cars and trucks, but potentially ideal both for power generation and water heating.
***
The beauty of the Stirling is that it can run off of any heat source. “We have powered them using cow dung in Bangladesh, and even by burning olive oil,” Kamen says.
***
So in 10 years will everyone have one?

“I’d say yes. Ten years from today the probability that you are depending on wires hanging on tree branches is as likely as that you’ll still be installing land lines for telephones. Close to zero.”

Kamen's $10,000 device has a smaller, lower cost competitor, funded 3 years ago through Kickstarter, Low Cost Stirling Engine, and now for sale through Selfton Motors, although it runs about $1400 just for the Volo One Engine (and about $375 more to get a wood fire box (or buy fire box plans for $25) and $505 for a generator to produce electricity and then add shipping or roughly $2800 total +/-):


Introducing the Volo One Engine. The heart of becoming energy self-reliant. The Volo One Engine runs off of heat. Heat created by wood, propane, natural gas, solar, and bio fuel. The engine converts the heat energy to rotary motion that turns a generator to create electricity. As some of us like to say - "put the wood in one end and electricity comes out the other".

The engine works in conjunction with our Fire Boxes (propane or wood). The hot end of the engine is placed in the hot Fire Box causing it to run (it must warmed up and be hand started). The engine can be utilized with any heat source. You do not have to use our Fire Boxes. You can install the engine into a wood stove or a fireplace. There is no exhaust from the engine itself. The engine is 8' long, about 16" in diameter and weighs over 200 lbs.

The engine is designed to last for many years with very little maintenance. There are no spark plugs, air filters, oil, or batteries.

You might note that the engine alone is about 8 feet long and weighs 200 pounds.
Here's a video of its components:

And another of a simple tin can version:

And, a solar powered version. Note that the heat from the lens is pretty high - high enough to ignite wood.

The Volo engine folks are looking at a solar version:

There are other solar power designs. See also here: 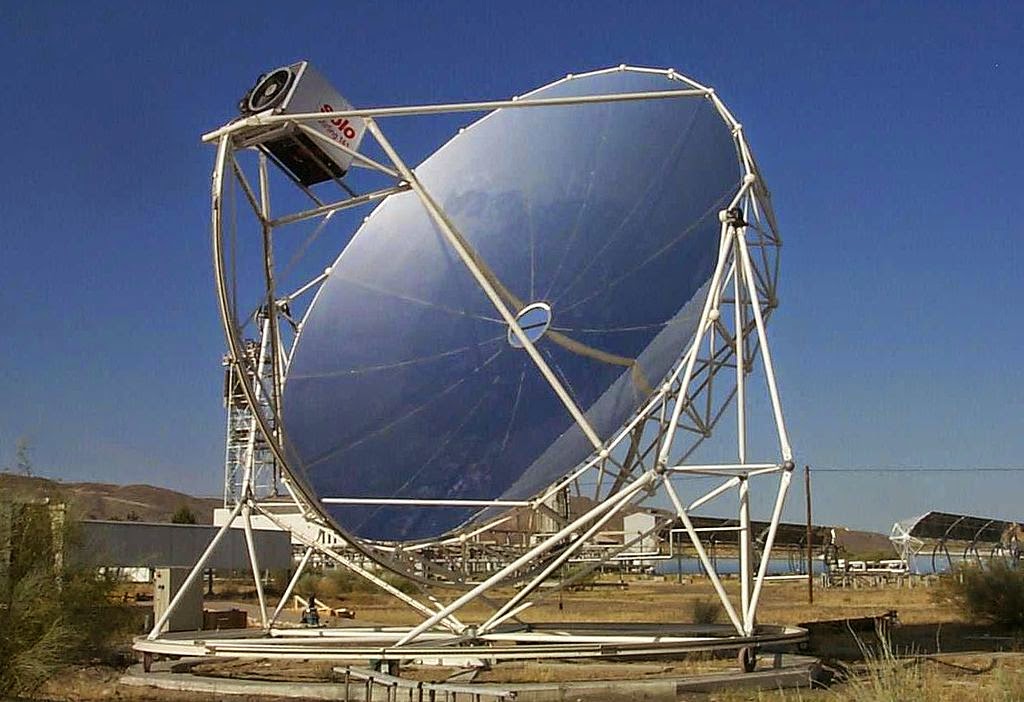 A technology worth keeping an eye on for disaster preparedness.