Saving Defense dollars is a good thing, especially if the mission can still get done albeit at the lower cost. The U.S. Air Force is lookiing at a way to shave $200- 500 million dollars a year from its budget by replacing big jets (Now a Boeing 707 variant - the E8-C) with smaller jets (Boeing offering up a 737-700 version and Grumman proposing either a Gulfstream G650 or G550 model) with updated technology. 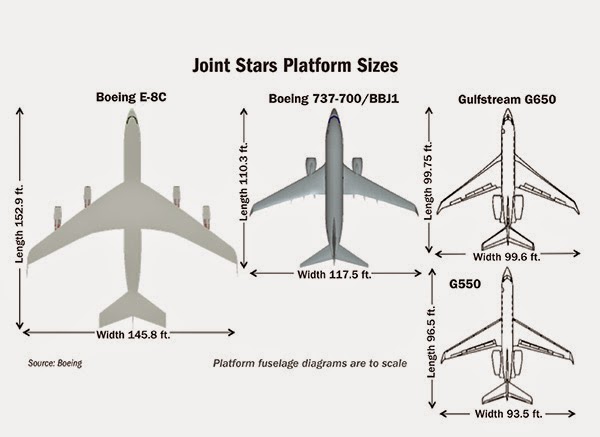 
The Air Force expects to spend about $4.3 billion buying 17 new Joint Stars aircraft based on its fiscal 2015 budget request. But the savings are expected to come in the annual operating cost of the aircraft: The E-8C would require about $650 million in work to meet requirements in the coming years, according to Jennifer Cassidy, an Air Force spokeswoman.

The platforms that housed the side-looking AN/APY-7 radars were old 707-300s purchased from airlines and outfitted by Northrop Grumman with the sensors and onboard work stations as well as supporting computer equipment. It was a thorny project, as each separate platform had its own aging and wear-and-tear issues. Twenty years later, the platform and its legacy computers, displays and radar are proving troublesome due to diminishing sources for parts and age of the equipment. The only commercial operator still listing the 707-300 in its fleet is Iran’s Meraj Air.

The replacement program is expected to save 28% in operations and sustainment funding, a cost avoidance of $200-500 million annually. “The current Jstars Recap Program Office estimates show a return on investment between fiscal year 2028 and 2030,” Cassidy says. Service officials provided written information rather than discussing their plans in an interview.