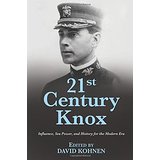 addition to the 21st Century Foundations series, we will have David Kohnen the editor of the latest in the series, 21st Century Knox, on for the full hour.

Kohnen described the focus of the book, Commodore Dudley Wright Knox, USN, as someone who, "... challended fellow naval professionals to recognize the inherent relevance of history in examining contemporary problems. In his writings, Knox cited historical examples when strategists foolishly anticipated the unknown future without first pursuing a detailed understanding of the past."

David Kohen earned a PhD with the Laughton Chair of Naval History at the University of London, King's College. He is the author of Commanders Winn and Knowles: Winning the U-boat War with Intelligence as well as other works.