On Midrats 26 June 2016 - Episode 338: Trans-national terrorism and the Long War with Bill Roggio

Please join us on 26 June 2016 at 5pm EDT for Midrats Episode 338: Trans-national terrorism and the Long War with Bill Roggio 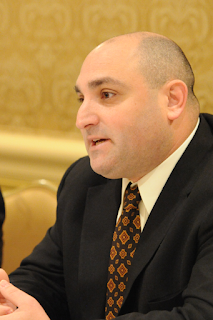 When the BREXIT dust settles one thing will remain – the Long War against Islamic terrorists.

In a wide arch along its bloody edge, Islamic extremism continues to look for new opportunities for expansion, and within the borders of Dar al-Islam seeks to impose a retrograde view of Islam by destroying religious minorities, secular governments, and Islamic modernizers.

This Sunday returning guest Bill Roggio will be with us for the full hour to discuss this and more. Bill is a senior fellow at the Foundation for Defense of Democracies, President of Public Multimedia Inc, a non-profit news organization; and the founder and Editor of The Long War Journal, a news site devoted to covering the war on terror. He has embedded with the US and the Iraqi military six times from 2005-08, and with the Canadian Army in Afghanistan in 2006. Bill served in the US Army and New Jersey National Guard from 1991-97.

Email ThisBlogThis!Share to TwitterShare to FacebookShare to Pinterest
Labels: Midrats, Midrats on Blogtalkradio, Midrats on iTunes, Midrats on Stitcher, Terrorists