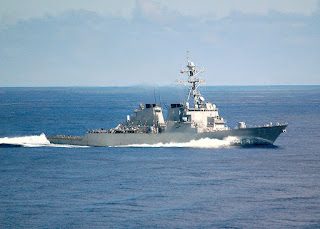 The crew of the guided-missile destroyer USS Mahan (DDG-72) fired three warning shots to ward off four armed attack boats coming at the ship at high speed, a defense official confirmed to USNI News on Monday.

On Sunday, Mahan was transiting the Strait of Hormuz into the Persian Gulf when the four Iranian Revolutionary Guard Corps Navy fast inshore attack craft (FIAC) came at the destroyer at a high rate of speed with their crew-served weapons manned, the official told USNI News. 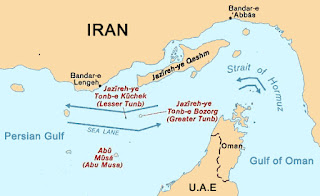 After several attempts to warn off the boars with radio communications, siren and the ship’s whistle the boats came within 900 yards of the guided missile destroyer before the crew fired three warning shots from one of the ships .50 caliber guns.

After the shots were fired, the boats broke off.

Ah, did someone suggest that "peace in our time" was on hand due to the Obama administration's deal with Iran?

Email ThisBlogThis!Share to TwitterShare to FacebookShare to Pinterest
Labels: Fun with Iran, The War with Iran