Saturday Is Old Radio Day:The Pacific Story and "Islam in the Pacific" (1945) 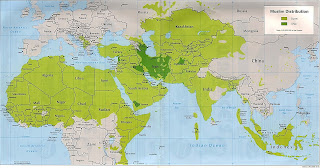 The series lasted 184 weeks with two weeks pre-empted and ended on January 26, 1947. It was considered a documentary.

The premise of the show was that with Europe in ruins, the Pacific might emerge as the center of political and social change in the world, and people should know something about it.

Here's a presentation about "Islam in the Pacific" from 1945: