Please join us at 5pm EST on Sunday 29 Jan 2017 for Midrats Episode 369: The Future of America's Military at Risk, with Bob Scales 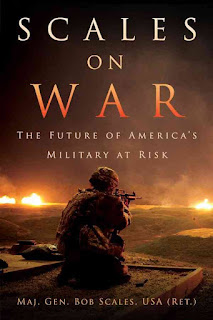 come, what direction and emphasis do we need for our military? What are the false horizons we need to watch out for, and what important areas do we seem to be either ignoring or forgetting?

For the full hour our guest to discuss this and more will be Bob Scales, Major General, US Army (Ret), discussing with him many of the issues he raises in his latest book from Naval Institute Press, Scales on War: The Future of America's Military at Risk.

Described by the Naval Institute Press:


Scales on War is a collection of ideas, concepts, and observations about contemporary war taken from over thirty years of research, writing, and personal experience by retired Major General Bob Scales. Scales’ unique style of writing utilizes contemporary military history, current events, and his philosophy of ground warfare to create a very personal and expansive view of the future direction of American defense policies.
Each chapter in the book addresses a distinct topic facing the upcoming prospects of America’s military, including tactical ground warfare, future gazing, the draft, and the role of women in the infantry. Fusing all of these topics together is Scales’ belief that, throughout its history, the United States has favored a technological approach to fighting its wars and has neglected its ground forces.

MAJ. GEN. Scales commanded units in Korea and the United States and two units in Vietnam, and he is the recipient of the Silver Star for action during the Battle of Hamburger Hill. He completed his service as commandant of the Army War College.

Catch the show live or pick it up later by clicking here. Or you can find the show later on our iTunes page or at Stitcher
Posted by Mark Tempest at 1/27/2017 08:30:00 AM