"Last of the 8-inch Cruiser Guns" 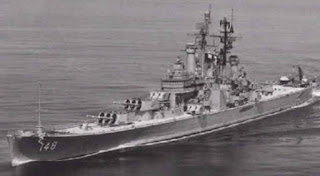 Almost all of them were armed with nine 8-inch/55-caliber guns of several different types whose projectiles were fired using bagged powder charges. With the outbreak of World War II in Europe, four cruisers of the Baltimore (CA-68) class were immediately ordered. A total of 24 ultimately would be ordered, with 14 entering service. Combat experience resulted in modifications, which were reflected in the Oregon City (CA-122) class, whose superstructure was more concentrated to widen the antiaircraft batteries’ arcs of fire. Three of the ten cruisers ordered were completed and commissioned.

Shortly after the Oregon Citys were ordered, a startlingly different 8-inch/55 gun became available, one that used semi-fixed ammunition and could repeat firing cycles without human assistance. This was the Mark 16, which required an expansion of the Oregon City design. Twelve ships were programmed, but with the war’s end, only the three hulls well underway were completed: the Des Moines (CA-134), Salem (CA-139), and Newport News (CA-148). These would be the last 8-inch-gun cruisers built by any navy.

Newport News was around for the last legs of the Vietnam War, arriving, I believe, soon after the North Vietnamese Army rolled south in the 1972 "Easter Invasion." 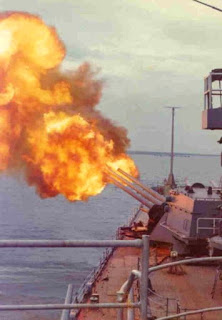 8"/55 guns was somewhat of a logistical issue for the force - there was a scarcity of it in theater - and ammunition ships entering the waters off Vietnam had to take on the remaining 8"/55 load of ammunition ships leaving the area to load out other munitions in Subic Bay. As I recall, there was a requirement to document loads of that ammo by message to keep the fleet higher ups in the know on where Newport News 8" was and in what quantities.

In the larger logistical sense it points out the problem of having to cater to one ship's needs while most of the rest of the NGFS force was using 5"/38 or 5"/54 or even 6"/47 rounds.

Newport News was a beautiful ship, though.