Battles every citizen of the U.S. ought to remember:


After his astounding victory at the Battle of Chancellorsville, Virginia, in May 1863,

Robert E. Lee led his Army of Northern Virginia in its second invasion of the North—the Gettysburg Campaign. With his army in high spirits, Lee intended to collect supplies in the abundant Pennsylvania farmland and take the fighting away from war-ravaged Virginia. He wanted to threaten Northern cities, weaken the North's appetite for war and, especially, win a major battle on Northern soil and strengthen the peace movement in the North. Prodded by President Abraham Lincoln, Maj. Gen. Joseph Hooker moved his Union Army of the Potomac in pursuit, but was relieved of command just three days before the battle. Hooker's successor, Maj. Gen. George Gordon Meade, moved northward, keeping his army between Lee and Washington, D.C. When Lee learned that Meade was in Pennsylvania, Lee concentrated his army around Gettysburg.

Elements of the two armies collided west and north of the town on July 1, 1863. Union cavalry under Brig. Gen. John Buford slowed the Confederate advance until Union infantry, the Union 1st and 11th Corps, arrived. More Confederate reinforcements under generals A.P. Hill and Richard Ewell reached the scene, however, and 30,000 Confederates ultimately defeated 20,000 Yankees, who fell back through Gettysburg to the hills south of town--Cemetery Hill and Culp's Hill.

On the second day of battle, the Union defended a fishhook-shaped range of hills and ridges south of Gettysburg with around 90,000 soldiers. Confederates essentially wrapped around the Union position with 70,000 soldiers. On the afternoon of July 2, Lee launched a heavy assault on the Union left flank, and fierce fighting raged at Devil's Den, Little Round Top, the Wheatfield, the Peach Orchard and Cemetery Ridge. On the Union right, demonstrations escalated into full-scale assaults on Culp's Hill and East Cemetery Hill. Although the Confederates gained ground, the Union defenders still held strong positions by the end of the day.

On July 3, fighting resumed on Culp's Hill, and cavalry battles raged to the east and south, but the main event was a dramatic infantry assault by 12,000 Confederates against the center of the Union line on Cemetery Ridge--Pickett's Charge. The charge was repulsed by Union rifle and artillery fire, at great losses to the Confederate army. Lee led his army on a torturous retreat back to Virginia. As many as 51,000 soldiers from both armies were killed, wounded, captured or missing in the three-day battle. Four months after the battle, President Lincoln used the dedication ceremony for Gettysburg's Soldiers National Cemetery to honor the fallen Union soldiers and redefine the purpose of the war in his historic Gettysburg Address.


It is one of the more remarkable campaigns of the American Civil War. For many a hard 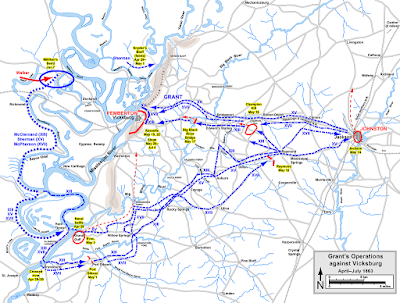 fought month, Ulysses S. Grant and his Army of the Tennessee had been trying to wrest away the strategic Confederate river fortress of Vicksburg, Mississippi. Previous, direct attempts to take this important town high above the Mississippi River were blocked by deft rebel counter moves and some of the most pernicious terrain in the entire Western theater.

In late April 1863, Grant undertook a new and bold campaign against Vicksburg and the Confederate defenders under John Pemberton. After conducting a surprise landing below Vicksburg at Bruinsburg, Mississippi, Grant’s forces moved rapidly inland, pushing back the threat posed by Joseph E. Johnston’s forces near Jackson. Once his rear was clear, Grant again turned his sights on Vicksburg.

Union victories at Champion Hill and Big Black Bridge weakened Pemberton’s forces, leaving the Confederate chief with no alternative but to retreat to Vicksburg's defenses. The Federals assailed the Rebel stronghold on May 19 and 22, but were repulsed with such great loss that Grant determined to lay siege to the city to avoid further loss of life. Soldiers and civilians alike endured the privations of siege warfare for 47 days before the surrender of Pemberton’s forces on July 4, 1863. With the Mississippi River now firmly in Union hands, the Confederacy's fate was all but sealed. 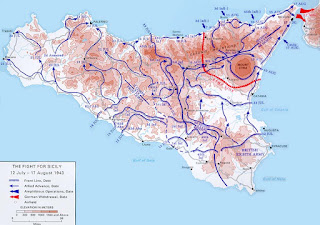 The American soldier had much to be proud of in the Sicily Campaign. With the exception of those units which had taken part in the Tunisia Campaign, especially the 1st and 9th Infantry Divisions, few American formations employed in Sicily began the campaign with any combat experience, and their abilities were still unknown. But the American troops had done well. After landing on a hostile shore, they had repelled several counterattacks, forced the enemy to withdraw, and relentlessly pursued him over sun-baked hills until the island was theirs. In thirty-eight days they and their British colleagues had killed or wounded approximately 29,000 enemy soldiers and captured over 140,000 more. In contrast, American losses totaled 2,237 killed and 6,544 wounded and captured. The British suffered 12,843 casualties, including 2,721 dead.

Sicily was also a victory for the logistician and the staff planner. Although overshadowed by the Normandy invasion a year later, Operation HUSKY was actually the largest amphibious operation of World War II in terms of the size of the landing zone and the number of divisions put ashore on the first day of the invasion. The amphibious operation, as well as the subsequent logistical effort, marked a clear triumph of American staff work and interservice cooperation. Army-Navy cooperation was particularly good, and the fire support provided by Allied naval vessels played a critical role in overcoming Axis resistance, especially around Gela. 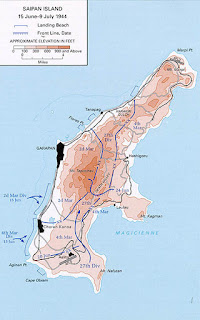 The Marine conquest of Tarawa in the Gilbert Islands in November 1943, followed by the joint Marine-Army capture of Kwajalein and Eniwetok atolls in the Marshall Islands in January-February 1944, had broken the outer ring of Japanese defenses and set the stage for succeeding operations.

These earlier victories had moved up the entire American operational timetable for the Central Pacific by three valuable months. After discussions of various alternatives (such as an attack on the vast Japanese base at Truk), the Joint Chiefs of Staff had settled on the next objective: the Mariana Islands. There were to be three principal targets: Saipan, Tinian, and Guam. It was a daring decision, for Saipan was 1,344 miles from the Marshalls and 3,226 miles from Hawaii, but only 1,250 miles from Japan. Furthermore, the islands were linchpins in the revised inner defense line which the Japanese felt they absolutely had to hold after their previous losses in the Central and Southwest Pacific.

Saipan represented a wholly new kind of prickly problem for an American assault. Instead of a small, flat coral islet in an atoll, it was a large island target of some 72 square miles, with terrain varying from flat cane fields to swamps to precipitous cliffs to the commanding 1,554-foot-high Mount Tapotchau. Moreover, the Japanese considered it "their own territory," in spite of the fact that it was legally only a mandate provided by the terms of the Versailles Treaty following World War I. The fact that Japan held the islands led it to install a policy of exclusion of all outsiders and the start of military construction, forbidden by the treaty, as early as 1934.

Attacking a formidable objective such as Saipan called for complex planning and much greater force than had previously been needed in the Central Pacific. An elaborate organization was therefore assembled. Admiral Raymond A. Spruance was in overall command of the force detailed to invade the Marianas as well as the naval units needed to protect them. Admiral Turner was in command over the amphibious task force, while Marine Lieutenant General Holland M. Smith was to direct the landing forces on Saipan and then on the neighboring island of Tinian. (A similar command structure, but with different combat units, was set up for the attack on Guam to the south.)
***
he campaign on Saipan had brought many American casualties, and it also heralded the kind of fighting which would be experienced in subsequent operations in the Central and Western Pacific in the days that lay ahead in the Pacific War. Holland Smith declared it "the decisive battle of the Pacific offensive" for it "opened the way to the home islands." Japanese General Saito had written that "the fate of the Empire will be decided in this one action." A Japanese admiral agreed, "Our war was lost with the loss of Saipan" It had truly been a "strategic strike" for the United States.

The proof of these fundamental judgements was dramatized four months later, when 100 B-29 bombers took off from Saipan bound for Tokyo.

There were other fateful results. The United States now had a secure advanced naval base for further punishing strikes close to enemy shores. Emperor Hirohito was now forced to consider a diplomatic settlement of the war. The militaristic General Tojo, the Premier, and his entire cabinet fell from power on 18 July, nine days after Saipan's loss.


The Marianas became vitally important because the orginal plan to base heavy bombers in China for attacks on the Japanese home islands faltered. An excellent hsitory of the issues in the China-Burma-India Theater is Barbara W. Tuchman's Pulitzer prize-winning work Stilwell and the American Experience in China, 1911-1945
Posted by Mark Tempest at 7/05/2017 02:03:00 PM