At approximately 11:45 am on June 7, 2019 while operating in the Philippine Sea, a Russian Destroyer (UDALOY I DD 572) made an unsafe maneuver against guided-missile cruiser USS Chancellorsville (CG-62), closing to approximately 50-100 feet putting the safety of her crew and ship at risk.

While USS Chancellorsville was recovering its helicopter on a steady course and speed when the Russian ship DD572 maneuvered from behind and to the right of Chancellorsville accelerated and closed to an unsafe distance of approximately 50-100 feet. This unsafe action forced USS Chancellorsville to execute all engines back full and to maneuver to avoid collision.

The videos are below. More damning, however, is this photo, obviously taken from the U.S. Navy helicopter: 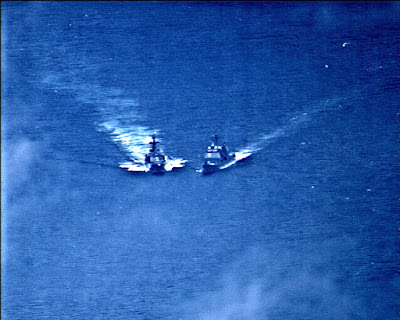 Russian ship is on the left, as you face the photo. Note that its wake shows it maneuvering to intercept the course of Chancellorville, whose wake show it maintaining a steady course.

Under the International Rules of the Nautical Road, a vessel overtaking another ship has the obligation -the burden -to avoid the vessel being overtaken, see here for the Convention on the International Regulations for Preventing Collisions at Sea, 1972 (COLREGs). Rule 13 governs in this instance, but background Rules are provided:

Now, look at these videos, not much doubt that the Russian destroyer is overtaking, as defined above the U.S. cruiser. In addition, the U.S. ship was conducting flight operations, thus adding to the Russian's breached obligation to stand clear of the U.S. ship.

This sort of behavior was not uncommon during the Cold War, and it appears that Cold War mentality is creeping back into the Russian psyche. Or at least that of its leadership.

Email ThisBlogThis!Share to TwitterShare to FacebookShare to Pinterest
Labels: Fun with Russia