Soybeans originated in Southeast Asia and were first domesticated by 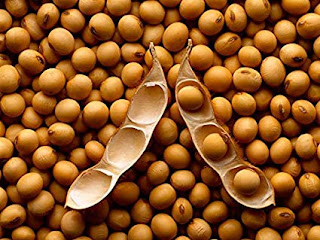 Chinese farmers around 1100 BC. By the first century AD, soybeans were grown in Japan and many other countries.


You might have heard of a trade dispute with China, China halts purchases of U.S. soybeans, report says:


China is reportedly putting purchases of U.S. soybeans on hold amid the growing trade war with the U.S., according to a report from Bloomberg News. As the world's largest soybean buyer, China's move could ramp up the economic pressure on American farmers.


China doesn't plan to cancel orders it's already made, Bloomberg reported, citing people familiar with the situation. Even though China had agreed earlier this year to buy 10 million tons of U.S. soybeans, the purchases have halted, with about 7 million tons of soybeans yet to be delivered to China, Bloomberg noted.

China may make up for a halt to U.S. soybeans by buying more from Brazil according to this Press release from Business Wire:


It is expected that with an expanding population and improving living standards, the demand for soybeans in China will continue to grow in the next few years. As the domestic soybean yields can hardly be increased, over 80% soybean consumption will rely on imports.

There are many uncertainties in the Sino-U.S. trade war. If China and the U.S. can reach a compromise on bilateral trade, in 2019, U.S. soybean imports to China may rebound rapidly; otherwise, the tariffs will remain at the current level or be increased, and there will be a surge in the prices and a plummet in the volume of U.S. soybeans imported to China.

Even if Chinese importers turn their attention to countries such as Brazil, the soaring demand will push up the prices of soybeans from these countries and press Chinese importers in cost. Overall, the ongoing Sino-U.S. trade war will increase the cost of importing soybeans, which means that Chinese consumers will have to pay more for soybean oil, bean products, dairy products, pork, eggs, etc.