Sea Kidnappings Between the Philippines and Malaysia 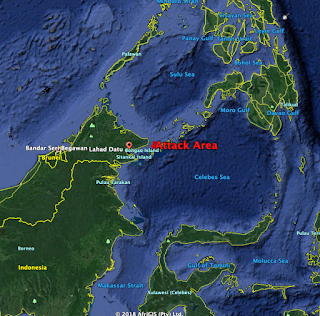 
On 18 Jun 19 at about 0245 hrs, about 10 men armed with high powered firearms, believed to be members of the Sulu-based Abu Sayyaf Group (ASG) abducted 10 crew from two Malaysian-registered fishing boats (with markings SA/2325/F and SA/5699/C). The fishing boats were in the vicinity waters of Lahad Datu, Sabah, Malaysia when the perpetrators boarded the fishing boats from one jungkong-type watercraft and one speed boat painted orange and white. The ASG members abducted four crew from the first fishing boat and six crew from the second fishing boat; and were sighted in the area of Pondohan, Tabawan, Sitangkai, Tawi-tawi, Philippines at about 0330 hrs on 18 Jun 19. The Philippine authorities are stepping up its patrol efforts, conducting pursuit operations and intensifying its military operation to rescue the abducted crew and neutralize the militant group.

First such attack in this area this year.