Not a Bad Idea: Trump tells other countries to protect own Gulf shipping

Trump tells other countries to protect own Gulf shipping 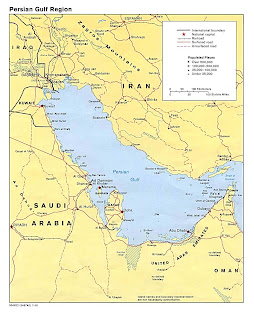 President Donald Trump on Monday told other countries to protect their own Gulf oil shipments, declaring that the United States has only limited strategic interest in the "dangerous" region.

In a pair of tweets, Trump said US aims regarding Iran boil down to "No Nuclear Weapons and No Further Sponsoring of Terror."

Stating that the United States is now the world's biggest energy producer, thereby weaning itself off decades of dependence on Middle Eastern oil, Trump said "we don't even need to be there."

And the US military should not be depended upon to keep the narrow sea routes along Iran's coast free.

"Why are we protecting the shipping lanes for other countries (many years) for zero compensation," he asked. "All of these countries should be protecting their own ships on what has always been a dangerous journey."

As for Tehran, Trump said, his only demand is that the country not pursue nuclear weapons and halts what the United States claims is backing for terrorist groups.

"The U.S. request for Iran is very simple," he wrote.
***
Trump's tweets add to his record of seeking a wider draw down of the US diplomatic and military footprint around the world.

Among the nations using oil from the Arabian Gulf area the French and the Brits have shared some of the sea lines of communication protection load, but since 1980 the laboring oar has been the U.S. Navy - which today has more sailors serving in that region of the world than anywhere else.

With the U.S. now perfectly capable of being energy independent, the vital national interest invoked by President Carter in the Carter Doctrine is no more, which is precisely what President Trump stated in his Tweets.

The Iranians count on U.S. reluctance to take Iran directly on or to directly confront Iran's effort to incite trouble throughout the area and to stage its small potato aggravations such as limpet mining ships or shooting down an unarmed drone. It's the "just not worth it" problem the U.S. faces - the aggravation level  of Iran's puny activity doesn't rise to the level of an existential threat to the U.S. Under the Weinberger Doctrine,  unless it does, there is no reason to go to war:


You might note that the "burr under the saddle" approach the Iranians follow never really crosses that line which would justify the U.S. completely destroying Iranian maritime forces of the Iranian Navy or its Iranian Revolutionary Guard or taking out the dictators who head Iran.

Critics of the Weinberger Doctrine might invoke the lessons set out in Colin Powell's December 1992 Foreign Affairs article U.S. Forces: Challenges Ahead
discussing the shift from a Cold War footing for the U.S. military to one based on dealing with "regional contingencies"


THE NEW NATIONAL military strategy is an unclassified document. Anyone can read it. It is short, to the point and unambiguous. The central idea in the strategy is the change from a focus on global war?fighting to a focus on regional contingencies. No communist hordes threaten western Europe today and, by extension, the rest of the free world. So our new strategy emphasizes being able to deal with individual crises without their escalating to global or thermonuclear war.

***
To help with the complex issue of the use of "violent" force, some have turned to a set of principles or a when-to-go-to-war doctrine. "Follow these directions and you can’t go wrong." There is, however, no fixed set of rules for the use of military force. To set one up is dangerous. First, it destroys the ambiguity we might want to exist in our enemy’s mind regarding our intentions. Unless part of our strategy is to destroy that ambiguity, it is usually helpful to keep it intact.

Second, having a fixed set of rules for how you will go to war is like saying you are always going to use the elevator in the event of fire in your apartment building. Surely enough, when the fire comes the elevator will be engulfed in flames or, worse, it will look good when you get in it only to fill with smoke and flames and crash a few minutes later. But do you stay in your apartment and burn to death because your plan calls for using the elevator to escape and the elevator is untenable? No, you run to the stairs, an outside fire escape or a window. In short, your plans to escape should be governed by the circumstances of the fire when it starts.

When a "fire" starts that might require committing armed forces, we need to evaluate the circumstances. Relevant questions include: Is the political objective we seek to achieve important, clearly defined and understood? Have all other nonviolent policy means failed? Will military force achieve the objective? At what cost? Have the gains and risks been analyzed? How might the situation that we seek to alter, once it is altered by force, develop further and what might be the consequences?

As an example of this logical process, we can examine the assertions of those who have asked why President Bush did not order our forces on to Baghdad after we had driven the Iraqi army out of Kuwait. We must assume that the political objective of such an order would have been capturing Saddam Hussein. Even if Hussein had waited for us to enter Baghdad, and even if we had been able to capture him, what purpose would it have served? And would serving that purpose have been worth the many more casualties that would have occurred? Would it have been worth the inevitable follow?up: major occupation forces in Iraq for years to come and a very expensive and complex American proconsulship in Baghdad? Fortunately for America, reasonable people at the time thought not. They still do.

I left that last paragraph in as a reminder that even you are engaging in punitive strikes or limited wars there is always the potential of getting stuck in problems that are not yours to solve, as we now ought to know too well. You want unforeseen consequences? See the effects of the Somalia, Libya and Syria "humanitarian" interventions, though they were of limited scope.

Where's this leave the U.S.? The situation that caused President Carter to make up a doctrine for the Middle East has changed. The reality is that the U.S. has no "vital national interest" in the Arabian Gulf. Whether our "allies" do is unclear - if they do, they should be taking steps to protect them without depending on the U.S. taxpayers to provide that protection through its investment in its own military. We have other things and places to focus our attention on.

President Trump is correct in his statements about what we seek from Iran - no nukes (they threaten U.S. allies) and stop funding terrorism. If the Iranians want peace and security, they know what they have to do to get it.

The message for those who rely on oil shipped out of the Arabian Gulf? Grow up and look after your own interests. As Henry Kissinger said, “America has no permanent friends or enemies, only interests” The American interest in the waters off Iran is dwindling rapidly.